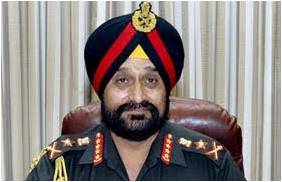 The Army Chief, General Bikram Singh, completes 100 days in office on September, 08, 2012. This may be a short period in the tenure of a senior functionary but it is significant since it gives an insight into the policy being adopted by the incumbent. General Bikram Singh took over at a time when the army was in the throes of its worst ever internal crisis. An acrimonious face off between the previous Army Chief, General VK Singh, and the government on a matter entirely in the personal domain had created tremors across the establishment and beyond. Personal agendas had overtaken the traditional professional approach of the Army. A deep feeling of mistrust had developed between the Army Headquarters (AHQ) and the Ministry of Defence (MOD).

There were several other critical issues at hand; a sensitive situation on the borders, changing facets of insurgency/terrorism and an increasingly unstable neighbourhood, all posed a unique set of security challenges. Lackadaisical pace of defence modernisation and defence acquisition was creating widespread alarm. Service personnel and ex-servicemen were quite unhappy with the government’s apathy to their demands.

As General Singh got down to work, what became immediately visible was a professional and understated approach. At the outset he addressed the two prongs of building institutional strength and creating a conducive work environment. As a first step he placed the institution before the individual; he took the media limelight away from the person of the Army Chief and directed it towards the Army as an institution. Media personnel were encouraged to cover the Army rather than the Chief. The end result was a welcome relief from the daily dose of acrimony of the days gone by and stress on relevant military issues.

In a remarkably short period of time, the Chief seems to have broken the walls of distrust that had come up between the AHQ and the MOD. The first discernible step in this direction was building of a good rapport with Defence Minister AK Antony. In turn, the Defence Minister by word and action has clearly demonstrated unstinted support for the Army Chief. As a result, an energised MOD has already put on fast track all such military hardware acquisitions whose shortage was a cause of alarm. Most importantly, the Chief has been given the leverage to set things right and put his policies in place.

The Defence Minister visited Jammu and Kashmir after a huge gap of 18 months; in an encouraging show of professional cohesiveness he was accompanied by the Army Chief and the Defence Secretary. It was the Defence Minister who put to rest all speculations about revocation of the Armed Forces Special Powers Act in the State of Jammu and Kashmir; at a later date he dispelled all anxieties about possible demilitarisation of Siachen. Apparently, General Bikram Singh has convinced the government to follow the Army’s recommendations on these sensitive aspects and then, most befittingly, left it to the Defence Minister to declare the policy of the government. Similarly, with regard anomalies in pay and allowances of defence personnel, the Defence Minister referred the matter to the Prime Minister in a strong letter; the Prime Minister, on his part, spoke on the subject in his Independence Day speech and gave an assurance that it would be dealt with appropriately. It is evident that the AHQ and MOD are now working towards common objectives.

General Singh has accorded top priority to the internal health of the force. He has undertaken extensive tours of units and formations on ground. At every destination he has interacted with and addressed officers and soldiers and shared with them such values that are close to his heart. He has stressed upon supremacy of the institution over the individual, operational readiness, efficient discharge constitutional responsibility, defence preparedness, discipline, return to core values of soldiering, officer-soldier bonding, austerity, financial probity, resort to corrective rather than punitive action et al. General Singh has aptly established that he holds veterans at the highest regard. During his interactions with the old soldiers he has assured them that their interests will be taken care of, the best part is that they believe in him.

A good beginning notwithstanding, the Chief has a tough road ahead; he has set the ball rolling but what is more important is to maintain the momentum. The security situation has unique dynamics; Pakistan is disintegrating, China is following a two faced policy and the neighbourhood is caught in a web of intrigue and insecurity. Internally, the situation in Jammu and Kashmir continues to simmer; the North East and Naxal problem are looking for some dynamic responses from the army.

The cohesiveness with the MOD has to translate into delivery of modern weapons systems on ground; the MOD and AHQ need to remain on the same page with regard to the career and professional interests of the rank and file to mitigate problems of stress. The values that the Chief has talked of have to be strengthened with sustained effort; justice has to prevail, graft has to be controlled and modernity has to be pursued relentlessly. All of this and much more will call for professionalism, maturity and sagacity in decision making on the part of the Chief.

While maintaining a low profile General Bikram Singh has allowed his work to do the talking. In a very professional and understated manner he has exuded a degree of self confidence that is very encouraging. He has made his presence felt in aspects of higher defence management and also at the grass roots. His clear thinking and straight talking has raised the Nations confidence in him by several notches. It is quite evident that he is firmly in the driver’s seat with a good grasp of the environment and challenges. If the last 100 days are any indicator, it can be safely presumed that the Indian Army will move forward positively in the coming days