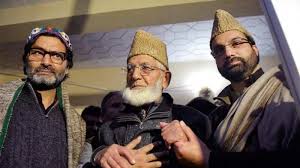 The moment the word “separatist” is used in India, it conjures the image of Syed Ali Shah Geelani, Mirwaiz Umar Farooq and their colleagues of the All Party Hurriyat Conference (APHC) in Kashmir, who subscribe to this ideology.

Use of the ideology of separatism as a political tool in Kashmir, however, goes as far back as 1931 when some Muslim pressure groups based in Lahore unleashed a fierce propaganda against the ruling monarchy in Jammu and Kashmir with Maharaja Hari Singh at its helm. The propagandists found in Sheikh Abdullah an able conduit to further their activities. He was, at that stage, a budding revolutionary and leader of the Muslim Conference.

What is notable here is that while the whole of India was fighting to gain independence from the British yoke, Sheikh Abdullah and his ilk in Kashmir were fighting for “separation” from the princely state of Jammu and Kashmir. As such, separation from India was definitely not an agenda for the people of the Kashmir Valley or its political leaders.

In fact, Sheikh Abdullah realised, all too soon, that the people of Jammu and Kashmir could not be made subservient to the Sunni Muslims since the state constituted of great political and cultural diversity with many other religions, cultures, dialects etc. The secular bonds simply could not be broken. He, therefore, changed the name of his political organisation from Muslim Conference to National Conference and opposed the idea of Pakistan.

It is notable that all through the Pakistan sponsored tribal invasion of Jammu and Kashmir, the people of the region supported the Indian Army to repel the attack. In fact, the Kashmiri people were very anti-Pakistan because of the brutal atrocities that the invading hordes of Pakistani mercenaries heaped upon them.

Sheikh Abdullah, as chief minister of the state and with a brute majority in the state assembly started speaking about revocation of accession in 1953 a good six years after Jammu and Kashmir had been firmly embedded as an integral part of India. This was due to his personal ambition and not because of any demand from the people.

Sheikh Abdullah could not get what he wanted and he was arrested. His arrest did not cause much disruption in the state including the Kashmir Valley. This gave a clear indication of the people not being with him on the issue of secession from the Indian Union.

The current situation of separatism came by in 1987 due to self serving politics of the new and emerging leadership. It was limited only to the Kashmir Valley and followed the political model set by Sheikh Abdullah.

Thus, the “ideology of separatism” has always been the handiwork of a few local political players in their attempt to gain power and has always been used for playing dirty, self serving politics at the local level in the Kashmir Valley.

The fatuousness of the current separatist ideology becomes apparent from the disparate demands that are made under its ambit. Some separatist leaders want freedom while others wish to align with Pakistan. None have a practical road map for running of the state under any of the said options. The entire ideology reeks of anarchism.

Separatists have dissected the people of Kashmir into small sub- groups – Sufi versus Wahabi; Shia versus Sunni versus Pahari; urban versus rural – the number of groups existing now are too many to count.

Happily, most of the separatist leaders are now under scrutiny of the National Investigation Agency (NIA) for terror funding. Many like Yasin Malik, Asiya Andrabi, Shabir Shah, Masrat Alam have been arrested while others like Marwaiz Umer Farooq, Syed Geelani are being questioned. These leaders have admitted to the formation of a Joint Resistance Leadership (JRL) that illegally extorted funds from the people, especially the business community.  The investigation process has received a boost in recent days by the arrest of one Zahoor Watali who is the kingpin for Hawala transactions of the separatists for foreign funding. Crucial electronic and documentary evidence is now available to establish the pattern of raising, collection, transfer and use of funds for terrorist and separatist activities.

The money received has been utilised to spear headed violent agitations  in the Kashmir Valley, by issuing “Protest Calendars” leading to economic shut down for months on end. It has also been established, that these leaders have misused the funds for personal purposes like funding the education of their children abroad. They have been confronted with evidence of their investment in many properties and commercial ventures mostly Benaami (on names of others).

The misfortune of the Kashmir valley is aggravated by “separatism” being exploited as a political tool by foreign powers to fan divisive and disruptive activities. All terrorist groups operating in the state maintain affiliations with some separatist group.

Dissatisfaction with the democratic processes is the product of deliberate propaganda. It is given wind by misrepresentation of facts. In actuality, the people want democracy and vouch for it in all elections from grass roots upwards.

It becomes quite apparent from the foregoing that the Indian Union has had little role to play in the basic ills of corruption, nepotism, and political brinkmanship on the basis of which secession is sought through the ideology of separatism.

The arrests, charges and choking of funds have caused a state of complete disarray in all sections of the separatist conglomerate. True to form, the so-called leaders have thrown ideology to the winds and have got into self preservation mode. Those screaming against India the loudest have suddenly become most accommodative.

It can be said with a fair degree of confidence that the myth of separatism in Kashmir now stands broken for all times to come. Democracy is gaining firm roots in the state inclusive of the Kashmir Valley. Today, the word “separatist” evokes a feeling of dreadfulness and dismay among the common, normal and hardworking people of Kashmir. This is because they look upon separatists as a set of people whose only contribution to their society is disruption and divisiveness leading to terrible economic loss and social suffering.

With the separatists in doldrums, Pakistan has been divested of its political control in the Kashmir Valley, the resultant effect is quite visible from the desperate utterances of Prime Minister Imran Khan at home and in foreign shores. Fortunately, the international community is fully aware of the ground situation and is not paying any heed to his diatribe. It is time for him too to read the writing on the wall and divert his energy to issues more critical for his nation like economy, internal security etc.

(Jasbir Sarai is a prominent leader of AAP in Punjab)