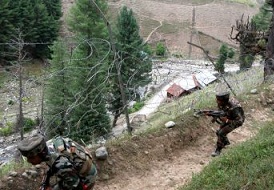 Lieutenant Navdeep Singh, a young Army officer hailing from Gurdaspur, Punjab, the scion of a family proud of its martial credentials, the son of an Army veteran; has mad the supreme sacrifice for the honour and integrity of the country. He lost his life in a counter-infiltration encounter on the line of control, along the famed Kishenganga River of the Gurez valley in Kashmir, barely six months after he had attained commission into the Army.

Navdeep had graduated with a degree in business management. The family, no doubt, had visions of him being installed in a comfortable air conditioned environment drawing a handsome salary and enjoying all the comforts of modern urban living. When would they have imagined that they would soon be the recipients of the heart rending news of his having made the ultimate sacrifice in the service of his nation On receiving the news of his son’s untimely death, Lieutenant. Navdeep Singh’s father, a soldier to the core, very stoically claimed that his son had died a martyr’s death in a bid to protect the honour of his country. Such a statement was only to be expected from one hailing from a family that had served with distinction in the Indian armed forces for the last three generations; it is deserving of the highest appreciation.

A word about the encounter itself, those who were infiltrating were foreign terrorists; they were well trained as is evident from the fierce fight that they put up once they were cornered, the sophistication of their

boats points towards the meticulous preparation that had been made to ensure their safe passage. A perusal of the war like contents recovered from the boat (sophisticated weaponry, a massive stock of ammunition, state-of-the art communication devices, explosives et al) points to their intention of setting off a series of violent activities in the region that would have put paid to the emerging environment of normalcy.

Lieutenant Navdeep Singh was part of an operation that foiled the largest infiltration bid into Indian territory from across the border during this year. An attempt that was well planned and well rehearsed as would be done by a professional military organisation. This bid sponsored by Pakistan, certainly did not augur well for the state of Jammu and Kashmir. Twelve terrorists were killed in the initial encounter while one was gunned down later.

The intended violence would, without doubt, have been perpetrated on the people of Jammu and Kashmir. It stands to reason to suggest that it was, in fact, for the people of Kashmir that Lieutenant Navdeep Singh laid down his life. Ironically, the very force that has been vilified as being an occupation force is fighting tooth and nail to preserve peace and harmony in the state. On the other hand those who claim to have the interests of the state at heart, those who claim to be the legitimate representatives and voice of Kashmir remain mute spectators.

There is a feeling of despondency across the nation due to the martyrdom of young Navdeep Singh. Yet, in certain quarter an ominous silence prevails. One wonders why the kinds of Syed Ali Shah Geelani who would normally have raised a hue and cry had there been any loss of civilian human life as part of collateral damage, have not come forward to express their sympathies for the family of Lieutenant. Navdeep Singh? Or is it that they would rather have the valley being held to ransom by the war mongers across who are showing no signs of giving up on their unholy agenda of violence. Lieutenant Navdeep Singh’s sacrifice has certainly not been acknowledged by those who actually benefitted from this act of bravery, a sad situation indeed.

The emerging sequence and timing of these infiltration bids is most interesting. Traditionally such bids peak during the early summer, and taper off through the monsoon; the existing trend seems to be is quite the reverse. One can only imagine that such mayhem is now designed to manifest only once the tourist season especially the Amarnath Yatra had earned the requisite revenue for the people of the valley. Who is organising and coordinating this strategy for the terrorists? Is it not surprising that this attempted was ninth in the line that have been made in the previous month itself. Whose benefit is being kept in mind while opting for this modus operandi?

The political establishment meanwhile vacillates between earning brownie points by claiming to have brought the situation under control and belittling the contribution of the security forces by frequently questioning the credibility of their actions. This apart, the fact remains that despite the tall claims of normalcy, there is no lack of activity on the part of the terrorist organisations. The frequent infiltration bids from across the border are ample proof of this. It is due to the vigilance and alacrity with which our security forces function that the terrorist organisations have not met with success that they are desperately looking for. The Indian army has for long performed in a commendable manner under conditions of extreme duress in the valley of Kashmir. It has taken almost two decades of bitter losses to restore normalcy to this region. It would serve us well to remember this whenever we, in our complacency, seek to deprecate their noble efforts. It is purely because of them that all those who would like to comment on the situation in Kashmir have an issue to speak of, for were it not for the security forces there would be no Kashmir at all.