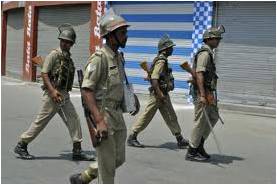 On, Monday, January 02, 2012, in an unfortunate incident in Uri, Kashmir, a standard 12 student was shot dead by CISF personnel when a protest by locals turned ugly and the CISF deployed at the NHPC run power project at Boniyar opened fire in self protection. The protest was being carried out in demand for a regular supply of electricity. Off late valley is facing a lot of power cuts which aggravate the problems of the locals in the acute winter season.

As expected, the state government has taken a stand against the CISF and has demanded justice for the deceased boy. In his statement Chief minister Omar Abdullah has said, “The way Altaf was killed is really sad. This is not less than a murder. The circumstances of his death are tragic, shocking and inexcusable. The government will spare no effort in handing over severe punishment to the culprits. Justice will be done. Even if we have to move any court or take recourse to any law to punish the personnel behind the killing of Altaf Ahmad, we would do so positively.”

How can a chief minister who is responsible for law and order, security and other aspects of governance make such statements? He is asking for justice from the central government when there is no need to do so. Definitely, the culprits will be dealt with in accordance with the law of the land. In this aspect it is the Judiciary which will play an active role; governments at the central or the state level have little say in the matter. Kashmir’s misfortune lies in the fact that any incident which has a political connotation or the potential of a mass protest is considered to be an opportunity to play to the gallery by the political leadership.

However, the important point that is being missed out is the role that the local police has played in the incident. The district police was supposed to be at the place of incident to shield the power plant. The CISF is mandated only to protect the installation and has no power to do anything outside the periphery of the installation. It is evident that the local Police did do much in the entire incident. This, in turn, leads to the question of the quantum of responsibility that the local Police has taken on its shoulders or is capable of taking on its shoulders in Jammu and Kashmir. The point needs to be considered in the context that law and order is a Police responsibility and this also includes crowd management. Had the local Police been in the forefront any firing, if required, would have been done by the local Police and the CISF would have been in support. The entire context of the legal recourse and responsibility would have changed and it would have been Omar Abdullah on the dock to answer the very questions that he is posing on the centre today. The whole demand of justice that the Chief Minister is talking about would have become demand of justice from his own office. This is not a stray incident where the state police has not performed its most basic task. This is, in fact, a rule. For every small incident, it is the central forces which are asked to the policing work.

The Jammu and Kashmir police has a numerical strength which is equivalent to that of other police forces in the country. There are also reports of a possible expansion of the force up to 50 new battalions in the foreseeable future. This is to augment its capability to meet the unique security and insurgency problems that beset the State. Now we have a situation where the state police is not in a position to perform its duties and is looking desperately for expansion and at the same time the state government is demanding a withdrawal of the very forces which have been put at its disposal to meet the same security challenges for which the expansion is being demanded. If AFPSA has to go, as demanded by chief minister, then these incidents are testimony to the need for its continuance since they highlight the inefficiency or incapability of the state police to shoulder its responsibility. If the Police force needs to be augmented to efficiently perform its duties because the region requires the extra security then where is the harm in continuing with the present arrangement of support being provided by the central forces. What is the logic behind demanding a revocation of the AFSPA and withdrawal of central security forces?

There is a need to devise a long term counter insurgency policy in the State which is based more on ground realities and less on politics. The policy must also cater for post insurgency period. The state government is trying to make a point that the state police will develop its own capability in counter insurgency and will replace the central forces. This is a good idea but it has its own short comings. How much time will be taken to raise, equip, and to make them fully operational? What will be their future when the region becomes absolutely normal? Central forces can be withdrawn but this will become a permanent load on the government which it can ill afford. The proposal for counter insurgency battalions of state police is not a right way to go forward. This looks like an ad hoc planning just to support their demand of removal of AFSPA. Playing to the gallery and emotional populism is not solution to problems of Kashmir. By painting a wrong picture of central forces state government is not doing favour to its people. In fact it is giving credibility to the separatist element; the last thing the state should do.