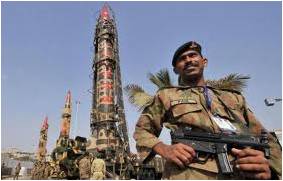 Pakistan’s President, Asif Ali Zardari, visited India accompanied by his son and Interior Minister, Rehman Malik, on a private pilgrimage to Ajmer Sharif. He held a meeting with Prime Minister Manmohan Singh and also attended a lunch hosted in his honour by the Prime Minister. All this happened around the same time when the US had declared a bounty of $10 million on the Pakistan based Lashkar-e-Toiba (LeT) Chief, Hafiz Mohammad Saeed. President Zardari could not stand up to the forthright demand made by Prime Minister Manmohan Singh for Pakistan to take action against Hafiz Saeed; he chose to diplomatically evade the issue. A nation fights to defend its core inherent values and here we have Pakistan hell bent on defending terrorists like Hafiz Saeed. This tells us exactly what that nation stands for.

The Indian media was looking at the visit as ‘Ziyarat’ diplomacy, akin to cricket diplomacy. But the innocuous, short and sweet discourse at 7 Race Course Road, wiped out any possibility for that. What could be the reason? Before coming to India President Zardari met with the Army Chief, General Kiyani, at the Governor House in Lahore. In attendance during the meeting were the interior minister and foreign minister of Pakistan. General Kiyani might have withheld his sanction for any progress towards improving of relations between the two countries, hence the watered down visit. In his anti-India feelings General Kiyani manages to find ample support from the opposition parties of Pakistan. The leader of opposition in Pakistan, Chaudhary Nissar, opposed Zardari’s visit and almost abused him in the Parliament. Similarly, the Difa-e-Pakistan group of religious parties of Pakistan asked Zardari to stay back in India.

Against the backdrop of such belligerence it would have been impossible for Zardari, who is at a very weak wicket in Pakistan, to make any positive contribution to Indo-Pakistan relations during his visit. The end result of these political postures was that his visit did not do much to change historic perceptions. Being quite aware of the way things would flow, Zardari had made it quite clear at the outset that his was a personal visit with no structured discussion on bilateral issues on the agenda. Thus, he managed to come empty handed and went back empty handed after giving media some space to speculate and generate media bytes.

It has, once again, become quite evident that Pakistan policy towards India is in the hands of the Pakistan army and no civilian is allowed to go beyond exchange of niceties. Further, unfortunate indications are that this status is not likely to change something soon. The civilian democratic institutions have not been able to assert themselves in the policy arena because of their inherent contradictions.

India time and again forgets that the reality of Indo-Pakistan relation is based on certain hard facts. Pakistan was created against the values that India and its ancient civilization stand for. The idea of ‘Pakistaniyat’ is based on abandoning of an age old culture and replacing it with a mix and match of West Asian and Central Asian culture which has caused nothing but damage to the Pakistani society while brewing hatred for India. It would not be out of turn to believe that Pakistan hates India even now, despite the six decades of separation between the two Nations which has provided ample opportunities to them to chart independent destinies. Pakistan’s obsession with Kashmir is a by-product of its identity crisis.

The sad part is that the Indian polity starts building castles in the air and gets into a frenzy whenever some new initiative like Zardari’s recent visit comes about. We do not even pause to reflect upon the hard facts. What kind of progress are we expecting when no one in Pakistan is ready to accept LeT’s role in the Mumbai attack? What signals have the peaceniks seen that have made them believe that there is hope for dialogue?

There is a thought process which argues that all may not be lost after all. India and Pakistan, in recent times, have made some progressive moves especially so on the economic front which has been quite close to Zardari’s heart ever since he became President of his Nation; he has, for long, been advocating an Indo-China type of relationship between India and Pakistan wherein trade is separated from political issues. Pakistan, after a delay of many years, has accorded most favoured nation status to India for trade matters. This move was welcomed by one and all. In the international arena Pakistan was applauded by everyone and India saw it as a new dawn in the relations of the two mations. However, there is a case filed against the Pakistan government in the country’s Supreme Court on giving MFN status to India; so much for the dreams of bringing about a progressive thought process.

Tussles between nations are, more often than not, about values, ideals and civilizational norms. India and Pakistan harbor feelings of mistrust due to some ideological issues. What India stands for is unfortunately antithesis for Pakistan even though the cultural values in of the latter state are quite similar to the former.

The conclusion is that Pakistan has not changed. No change in its policy towards India can be expected till there is change in the heart of the Pakistan Army, which is very unlikely. There has been movement on the economic front but that has more to do with the sliding economic situation of Pakistan. There is nothing more than that. But one significant thing that has happened is that now Pakistan does not compare itself with India. Pakistan is slowly accepting India as a nation in a separate much elevated league; this realization may somewhat smoothen its anti India policy. Our growth and rise could change Pakistan’s heart and mind.