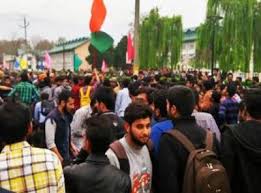 The National Institute of Technology (NIT), Srinagar is an iconic centre of education. Established in 1960 and earlier known as the Regional Engineering College (REC), Srinagar, it has for many decades now been a preferred destination for those who wish to pursue engineering. It is one institution in the Kashmir valley that has boasts of an alumnus from the best available in the whole of India. The institute, earlier under the Kashmir university is now a deemed university and has been declared an institute of national importance.

The fact that the institute witnessed a spat between the local students and those who have come from other states to study there came as a surprise. Normally students of engineering colleges are studious and career oriented, they fight shy of getting embroiled in controversies. That is happened as a fall out of a cricket match between Indian and West Indies (which India lost) is even more intriguing.

The institute has no history of this kind of an upheaval. It did not happen even when terrorism was at its peak, so why now? Also, what prompted the police to take such a heavy handed action?

As is expected, there are contrarian versions. The police says that it went in to stop protesting students from marching out, and by doing so, it was saving them from further harm. If this was the case then why did the police not stop the students at the gate? Why did the policemen enter the campus premises and carry out a baton charge that has left many seriously injured?

Now that the deed is done the general consensus among all right thinking people is that the matter should be given time and space to cool off and not politicised under any circumstances.

This is a highly idealistic aspiration and as events are unfolding it seems to be unrealistic as well. First and foremost, the media led by the electronic segment with its unending debates supplemented by a constant run of violent footage is neither allowing the matter to cool off or remain unpoliticised.

The panellists selected by the electronic media to join the debate are either from the separatist camp or those who have no knowledge of Kashmir and its sensitivities. Hence, misinformation is gaining credence while the actual and more important requirement of providing the healing touch has been set aside.

Secondly, the politicians are not inclined to lose this opportunity in making a statement. This jamboree has been led, as usual, by the separatist Syed Ali shah Geelani and followed by Omar Abdullah, who cannot be expected to leave Chief Minister Mehbooba Mufti in unscathed in her first few days in office.

The office bearers of the Bharatiya Janata Party (BJP), both from the government at the centre and the state, have been making some placatory noises but who is ready to listen to them when such a huge sensationalist story is unfolding?

A team from the Ministry of Human Resource Development (MHRD), Government of India, is already in the NIT campus to carry out an assessment. Reports suggest that student of the institution who have come from outside Kashmir are insistent that they be shifted out. They feel threatened from the Jammu Kashmir police. Even though the Jammu and Kashmir Police personnel have been removed from the campus and replaced by contingents of the Central Reserve Police Force (CRPF) the student feel that the police will come in later to take revenge.

It is, therefore, quite evident that neither will the incident remain above politics and nor will it die down in a hurry till such time that some very firm action is taken to nip the matter in the bud and that too at the earliest.

Those indulging themselves by politicising the incident need to pause for a moment and understand the ramifications. If the matter is not resolved, the demand of the out station students to shift the institute out of Kashmir will gain momentum.

Such recourse will spell disaster for Kashmir. It will symbolically be a grim replay of the exodus of Kashmiri Pundits from the valley in the early 1980’s. It will send out negative vibes about the safety and security, negatively impact business, adversely affect tourism, make things difficult for Kashmir students studying outside the state and create problems for all those Kashmiri’s who are doing business in other parts of the country.

It is encouraging to note that the central government has reposed full faith in the ability of the state government to deal with the situation. Statements from Union Home Minister Rajnath Singh and MHRD Minister, Smriti Irani, have placed chief minister of Jammu and Kashmir, Mehbooba Mufti on the forefront.  “She (Mehbooba) assured that all students will be safe. She said an inquiry will be conducted to find out how the incident happened and also fix responsibility,” said Rajnath Singh while clearly indicating as to who is in the driver’s seat.

Equally important with managing the situation is the need to investigate it thoroughly. Such campus tensions in NIT and erstwhile REC, Srinagar have been happening earlier also. Why is it that this time the matter has taken such a dangerous and ugly turn? The perpetrators need to be identified and dealt with severely. The entry of the policemen into the campus and the unprecedented level of force applied also needs to be put under the scanner?

The manner in which the matter unfolds in the next few days will be an acid test of the capacity of the Mehbooba led coalition to handle issues, it will reflect on the capacity of the coalition to take on sensitive issues. A success handling will also mean a slap in the face of those who wish to keep the pot boiling in Kashmir. Here’s hoping that things will fall in place in a manner that is just and equitable.