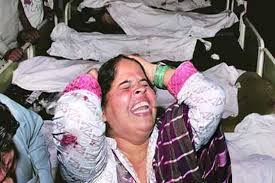 The terror strike at the Wagah border has caused the death and maiming of many innocent civilians, including women and children. It is a heart wrenching tragedy. Even as Pakistan tries to come to grips with the situation there are many, more within Pakistan than outside, who are convinced that this was a tragedy waiting to happen!

Many terrorist organisations are falling over each other to claim responsibility for the attack. The main among these is the Jamaat-ul-Ahrar which is known to be a splinter group of the Tehrik-e-Taliban Pakistan (TTP). The spokesperson of the terror outfit who claimed responsibility was speaking from Afghanistan. Another group claiming responsibility is Jundullah, which is also said to be loosely aligned with the TTP. Both groups have stated that the attack was a revenge for the military engagement in North Waziristan code named Operation Zarb-e-Azb. It, therefore, is not difficult to surmise that the attack was carried out either by the TTP itself or by a sister organisation in its support.

There is a need, therefore, to question the wisdom behind launch of Operation Zarb-e-Azb by the Pakistan army, despite a good degree of opposition from the Nawaz Sharif government. The operation has been going on for more than five months now, having been launched on June, 15. 2014. In this period the objectives have not been met, instead, a host of other problems have surfaced. On the one hand Pakistan has not been able to neutralise the militants since they have escaped into Afghanistan and on the other hand the local population stands alienated due to massive internal displacement.

Surely the Pakistan army would have known that the attack would lead to internal displacement of hundreds of thousands of civilians since something similar had happened when an operation was launched in South Waziristan earlier. The Pakistan army would also be aware that the militants hiding in the area would use the porous border to escape to Afghanistan.

Now the Pakistan army is trying to save face by saying that Afghanistan has not cooperated. At no stage it was said that Operation Zarb-e-Azb would be conducted jointly by the Pakistan and the Afghan Armies or that Afghanistan would assuredly support Pakistan. Afghanistan is not known to have made any such commitment. In fact, it is well known that the Afghan army is preoccupied with a critical situation within the country itself and is in no position to come to the aid of Pakistan. In case the generals of Pakistan were taking such support for granted in their planning stage they were committing one more of the many tactical blunders based on presumptions that they have made earlier.  Indo-Pakistan war of 1965 and the Kargil misadventure are prime examples.

The condition of the persons displaced from North Waziristan is going from bad to worse. The displaced people located in Peshawar have started taking shelter in abandoned shops at Shalobar and Akkakhel, due to inability of the federal government of Pakistan to provide even temporary accommodation. This is just one example of the desperation being experienced by these luckless people.

The Inter Services Public Relations (ISPR) of the Pakistan army has been building a very rosy picture of the progress being made in Operation Zarb-e-Azb. In order to counter the false propaganda the TTP, through its fringe elements, has conducted the suicide attack at Wagah. It has found justification for the same from the plight of the innocent displaced people.

Wagah fitted the bill as a target since it is a public place where lots of people visit daily. More importantly, the parade held there is a military ceremony and striking the same amounts to striking at the core of the Pakistan army. The message has been sent forth loud and clear. The timing of the attack has been well planned; the security establishment was all geared up to meet a perceived terrorist threat to Muharram processions, it never thought that Wagah would be targeted at this point in time. This aspect also points towards the detailed and clinical planning that has gone into the strike. In fact, the terrorist attack would have caused untold damage had the terrorists been able to get close to the international border with India where many Indians were also watching the parade.

As things stand, the position of Pakistan army is tenuous. As soon as Operation Zarb-e-Azb is called off and people are told to go back to their ruined houses, the TTP will also come back to claim what it had left. So it will be business as usual in North Waziristan. Pakistan army will have to contend with resurrected militancy with active support of locals people who have developed a loathing for the establishment. The government of Pakistan will continue to remain as isolated as ever.

It is time for the government of Pakistan to realise that there are no quick fix solutions to terrorism. It is also time for the Pakistan army to realise that it cannot bomb the daylights out of a province and expect the people to be eternally grateful. The only way forward is to admit the mistakes committed and opt for a change in political and military strategy. The revised strategy should sideline personal agendas and keep the nation first; it should be based on logical assessments, not grandiose assumptions that are essentially self serving.

Pakistan has to fight its internal battle against terror on its own, nobody, least of all India, can help. What can help is the confidence within Pakistan that no threat would emanate from the Indian border.  India has done nothing that would give Pakistan a reason to think otherwise; the confidence in Pakistan, therefore, has to come from within, it cannot be the product of a diplomatic assurance.

The silver lining is that the Wagah tragedy has brought India and Pakistan closer as is evident from the stoic decision to continue with the ceremony within 24 hours of the incident. This proves that both countries are sensitive of each other’s problems and challenges. In case a broadminded, uninhibited view is taken then terror can be fought jointly.