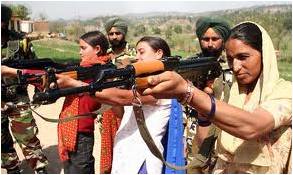 An encounter raged on in Keri forests of Budhal area in Rajouri district after five to six Village Defence Committee (VDC) members were fired upon by two terrorists causing injuries to one of them. Army and police have cordoned off the forests and were hunting the militants. It has been reported that a group of five to six VDC members, who had gone to the forest for a reconnaissance, observed movement of two terrorists. On being challenged the terrorists opened fire and in the brief exchange one of the VDC members sustained injuries. The militants managed to disengage and escape into the forests. The VDC members later informed Army and police and troops of 60 Rashtriya Rifles along with police rushed to the spot. The search operations are in progress.

Creation of VDC’s is a novel initiative launched by the Indian army in J&K which has attained a fair level of success especially in the region south of the Pir Panjal. The villagers became sick and tired of the atrocities being heaped upon them by the terrorists and volunteered to organize self protection. The Army imparted basic training to the villagers who volunteered to join the VDC. They were also given arms and ammunition for their defence. The VDC functions in close coordination with the Police and the local Army unit. This initiative has greatly decreased the interference of the terrorists in the affairs of the villages and has in turn assisted in bringing down the level of terrorist initiated activity in the region. Interestingly, since men are often out in the fields and the terrorists tend to take advantage of this situation to coem in a molest the women, in many villages there are all women VDC’s which are very effective