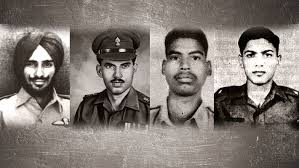 Pakistan can never forget the humiliation of 16 December 1971, when Indian forces entered Dhaka, the capital of East Pakistan and accepted the unconditional surrender of  almost four division strong Pak Army Eastern Theatre Command.  Pakistan was dismembered and the whole world watched the birth of a new nation named Bangladesh. India declared Unilateral Ceasefire at 1631 hours on 16.

The War officially started on 03, December when Pakistan Air force launched simultaneous strikes on 11 airbases in lndia. India responded with full might and in 13 days blitzkrieg on eastern front and western Front, demolished Pakistani defences by capturing 15000 square kilometres of hostile territory. 93,000 Pakistani troops were made Prisoners of War, 9000 troops killed and 25000 wounded. 2500 lndian troops also made the supreme sacrifice. About 3 million Bangladeshis were also killed and 2 lakh women were raped by Pak soldiers/supporting militia within 9 months of the crackdown.

Overall, it was a glorious victory for the Indian Armed forces. They fought united and professionally. It was a largest surrender taken by any Army after World war ll and largest tank battles fought after World War II. Indian Army created a new nation in just 13 days short and swift war, an unparalleled feat in the world military history.

Heroes of the war are many known and unsung. Premier among them were four Paramvir Chakra awarded in the course of the war. We salute them all.

Albert Ekka was born on 27 December 1942 at Zari village of Ranchi District in Jharkhand State. He belonged to a Tribal family. His father name was Julius Ekka, a simple farmer and mother was Mariam ekka. He was an excellent marksman archer. He was enrolled in The Bihar Regiment on 27 December 1962 at the age of 20 years. In 1968, he was posted to 14 Guards Battalion. He got married to Balamdine Ekka in 1971 just before the war.

14 Guards was advancing on Hilli-Akhura axis on 6 Dec 1971, when enemy opened up Medium machine guns (MMG) and mortars on leading A company. Another Light machine gun also was causing lot of casualties on Albert Ekka’s Section from flank. An attack was launched on the fortified position. Close hand to hand fight took place even as the Light machine gun continued firing. Albert crawled to the LMG bunker, bayoneted the two enemy soldiers and silenced the weapon. He suffered lot of bullet injuries during assault and close combat. The company was on the objective but a MMG opened up from a depth locality double storey fortification. All attempts failed to silence the MMG which was taking heavy toll of troops and halted the advance. Albert Ekka, in-spite of being severely injured volunteered to crawl to the rear and climb up. Under a smoke screen he crawled up and lobbed grenades and killed the MMG crew. He also collapsed due to excessive bleeding . The MMG post was silenced and the Battalion captured the objective due to supreme sacrifice of Lance Naik Albert Ekka who displayed the most conspicuous bravery and resolute determination  in the face of the enemy. He was awarded Paramvir Chakra  posthumously.

Major Hoshiar Singh was born in Sisana village, Sonipat district, Haryana to Choudhary Hira Singh Dhaiya. He was a state level basketball player and physically very tough. He was married to Dhano Devi. After his schooling and one year’s study at the Jat College, Rohtak he initially enrolled in 2 JAT.  He was commissioned in the 3 Grenadiers  on 30 June 1963, and was promoted lieutenant on 30 June 1965. His first posting was in NEFA. In the 1965 Indo-Pakistan war, he saw some action in the Rajasthan sector, for which he was Mentioned-in-Dispatches. He was promoted to Captain on 30 June 1969.

On 15 December, 1971 his battalion was given the task of establishing a bridgehead across the Basantar river in the Shakargarh Sector. Major Hoshiar Singh was commanding the left forward company and was ordered to capture the enemy locality of Jarpal. This was a well-fortified position and was held in strength by the enemy. During the assault, his company came under intense shelling and effective crossfire from enemy medium machine guns. Undeterred, he led the charge and captured the objective after a fierce hand-to hand fight. The enemy reacted and put in three counter attacks on 16 December 1971, two of them supported by Armour, Major Hoshiar Singh unmindful of the heavy shelling and tank fire went from trench to trench, motivating his command and encouraging his men to stand fast and fight. Inspired by his courage and dauntless leadership, his company repulsed all the attacks inflicting heavy casualties on the enemy. Again, on 17 December 1971 the enemy made another attack with a battalion supported by heavy artillery fire. Though seriously wounded by enemy shelling, Major Hoshiar Singh again went from trench to trench moving about in the open with utter disregard to his personal safety when an enemy shell landed near the medium machine gun post injuring the crew and rendering it inoperative. Major Hoshiar Singh, realizing the importance of machine-gun fire, immediately rushed to the machine-gun pit and though seriously wounded himself, manned the gun inflicting heavy casualties on the enemy. The attack was successfully repulsed and the enemy retreated leaving behind 85 dead including their Commanding Officer and three other officers. Though seriously wounded, Major Hoshiar Singh refused to be evacuated till the ceasefire. Throughout this operation, Major Hoshiar Singh displayed most conspicuous gallantry, indomitable fighting spirit and leadership in the highest traditions of the Army and was awarded Paramvir CVhakra.

Nirmal Jit Singh Sekhon was born on 17 July 1943 in the village of Isewal, Ludhiana . He was the son of M.W.O. (Honorary) Flight Lieutenant Tarlok Singh Sekhon. He was commissioned into the Indian Air Force on 4 June 1967 as a  Pilot Officer

During the war, he was serving with the No 18 Squadron, “The Flying Bullets” of IAF, now re-raised with Tejas aircraft. He was flying the Follan Gnat Fighter aircraft and was based at Srinagar. On 14 December 1971, Srinagar airfield was attacked by six Pakistan Air Force f-86 jets of 26 Squadron  from PAF base Peshawar. Flying Officer Sekhon was on operation readiness platform duty at that time. As soon as the first aircraft attacked, Sekhon rolled for take-off as No 2 in a two-Gnat formation, with Flt Lieutenant Ghumman in the lead. They took off just as the first bombs were falling on the runway. Flt Lieutenant Ghuman, lost visual contact with his wingman just after take-off and remained out of the fight leaving Sekhon to handle the muddle all by himself. Sekhon lost no time in singling out the first Sabre pair, which was re-forming after the bombing run. In the ensuing air battle, Sekhon scored a direct hit on one Sabre and set another ablaze. The latter was seen heading away towards Rajauri, trailing smoke.

Sekhon, after being hit, was advised to return to the base. He is said to have flown in straight, wings level for some time, then going inverted, plummeting down, probably due failure of the control system. He attempted a last-minute ejection, which did not prove successful. The wreckage of the Gnat was found in a gorge, near the road coming from Srinagar town to the base, a few miles from the base. Despite many search efforts by Army and Air Force, his remains were never found due to the mountainous terrain much to the disappointment of his wife and family. He is truly remembered as saviour of Srinagar. Flyingh Officer Nirmal Jit Singh Sekhon is the only Prramvir Chakra awardee of the Indian Air Force.

Arun Khetarpal was born in Pune, Maharashtra on 14 October 1950. His family belonged to Sargodha, Pakistan, and had migrated to India after partition as refugees. His father Lt Col (later Brigadier) M. L. Khetarpal was a Corps of Engineers officer serving in the Indian Army and his family traced a long history of military service. He did his schooling from Lawrence School, Sanawar, and distinguished himself both as an able student and sportsman. He was the school prefect. Khetarpal joined the National Defence Academy in June 1967. He belonged to Foxtrot Squadron where he was the Squadron Cadet Captain of the 38th Course. His NDA No was 7498/F/38. He subsequently went on to join the Indian Military Academy. In June 1971, Khetarpal was commissioned into the 17 Poona Horse.

On 16 December 1971, the Squadron Commander of ‘B’ Squadron, the Poona Horse asked for reinforcement as the Pakistani Armour which was superior in strength, counter attacked at Jarpal, in the Shakargarh Sector’ on hearing this transmission, Second Lieutenant Arun Khetarpal, who was in ‘A’ Squadron, voluntarily moved along with his troop to assist ‘B’ Squadron. En route, while crossing the Basantar river, Second Lieutenant Arun Khetarpal and his troop came under fire from enemy strong points and RCL gun nests that were still holding out. Time was at a premium and as critical situation was developing in the ‘B’ Squadron sector, Arun Khetarpal, threw caution to the winds and attacked the impending enemy strong points and literally charged at them, overrunning the defence works with his tanks and capturing the enemy infantry and weapon crew at pistol point. Second Lieutenant Arun Khetarpal continued to attack relentlessly until all enemy opposition was overcome and he broke through towards the ‘B’ Squadron position, just in time to see the enemy tanks pulling back after their initial probing attack on this squadron. He was so carried away by the wild enthusiasm of battle and the impetus of his own headlong dash that he started chasing the withdrawing tanks and even managed to shoot and destroy one. Soon thereafter, the enemy reformed with a squadron of armour for a second attack and this time they selected the sector held by Second Lieutenant Arun Khetarpal and two other tanks as the points for their main effort. A fierce tank fight ensued in which ten enemy tanks were hit and destroyed. The Tank of Second Lieutenant Arun Khetarpal was hit and he was severely wounded. He was asked to abandon his tank but he realised that the enemy, though badly decimated, was continuing to advance in his sector of responsibility and if he abandoned his tank the enemy would break through, he gallantly fought on and destroyed another enemy tank. At this stage, his tank received a second hit which resulted in the death of this gallant officer.

Second Lieutenant Arun Khetarpal, by his intrepid valour, saved the day; the enemy was denied the breakthrough he was so desperately seeking. Not one enemy tank got through. Second Lieutenant Arun Khetarpal had shown the best qualities of leadership, tenacity of purpose and the will to close in with the enemy. For this   act of courage and self-sacrifice far beyond the call of duty, he was awarded Paramvir Chakra, Posthumously.

Writing about the 1971 Indo-Pakistan War of 1971 , Sydeny Chauberg of New York Times stated,  “l do not like sitting around praising armies but this lndian Army was something, they were great all the way..I never saw any man flinch. There was a tremendous spirit in lndian troops  and it did good to experience it…they were perfect gentlemen.” We are proud of our true heroes of Indian Armed forces who never hesitate to make supreme sacrifices beyond the call of duty and  for the integrity of mother India.