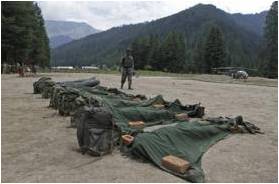 In a recent statement in the State Legislative Assembly, Chief Minister Omar Abdullah, has rejected the misnomer of mass graves in Jammu and Kashmir. “Most of the graves have only one person and a few are with two persons but no grave is having more than two persons”, he said. By so saying the Chief Minister has laid to rest the false impression that Kashmir has hundreds of people lying in a single grave. A lot many of these unmarked graves are those of killed foreign terrorists who infiltrated into India in large numbers during the 1990’s and were killed by the security forces. The Chief Minister disclosed that the militants from 12 foreign countries including Russia, Chechnya, Sudan, Pakistan, Britain and Afghanistan have been killed in encounters in the State and their graves do exist.

As the situation is improving, skeletons are coming out of the terrorist closet which point towards the barbarous tendencies of these serial killers. Recently, on August, 18, 2011, JK Police was successful in forcing a terrorist group of four belonging to the Hizbul Mujahedeen Pir Panjal Regiment to surrender. Information about the location of the terrorists at Nikon, near the Reasi-Kulgam border, was provided by a mole placed within the group. The unique operation was carried out jointly by the Police, the Army and the CRPF on both sides of the Pir Panjal range. All four terrorists belonged to Mahore in District Reasi. They were identified as Mohd Rafiq Sheikh r/o Neoch, Gulabgarh, who was a self claimed divisional commander of the terrorist outfit; Bashir Ahmed Sheikh r/o Neoch; Mohd Shafi Sheikh r/o Dewal Doga; and Mohd Maqbool Sheikh r/o Lar. The surrendered militants handed over two AK-47 rifles, one under barrel grenade launcher, one wireless set, one mobile phone, a huge quantity of ammunition and warlike stores.

Interrogation of the surrendered terrorists revealed a horrendous tale of terrorist atrocity. The terrorists gave information about the mysterious killing of two handicapped brothers Bashir and Ghulam Mohi-ud-Din, sons of Jamal Din, r/o Adbais, Tehsil Mahore, District Reasi on June, 04, 2007. The brothers were employed as teachers under the Rehbar-i-Talim scheme. They were kidnapped by one Mohd Shafi alias Badshah Khan, a divisional commander of the HMPPR and a resident of Dewal in District Reasi, along with four accomplices also from District Reasi, at the behest of Sarpanch Amin of Adbais village, who told the terrorists that the brothers were informers for the security forces. Amin had some business rivalry with both brothers. The unfortunate brothers were taken to Richa Bagla Forest near Bermy Dhar which is 12 hours journey from Reasi with a very steep climb. They were killed, no doubt after the mandatory torture, and their bodies were hidden in a hollow stem of a pine tree.

The surrendered terrorists further disclosed that two person of the village, Bashir Ahmad and Jamaldeen knew the location of the tree. The Police then took the two persons to the location where the identified tree was cut down and the bodies recovered. They were identified by the third brother mainly from the black Pathan suit, a ring that was retrieved from one of the bodies and the bent bones of the handicapped hands. A large quantity of ammunition, well preserved since 2007, was also recovered from the nearby area. This including a pika gun, rocket propelled grenade launcher, a light machine gun, Chinese pistols, a large quantity of explosives and items required to make IED’s, grenades and other war like material. The five terrorists involved in this horrendous crime against humanity were ultimately killed by the security forces between 2008 and 2009.

In the era when terrorism was at its peak, terrorists threw ideology to the winds. They escalated violence levels by indulging in heinous actions that exposed them as remorseless, fundamentalist and pathological killers who enjoyed inflicting misery for no logical purpose. They took on the mantle of judge and jury to spread death and mayhem amongst hapless, innocent villagers. The villagers were wary of informing the police and security forces for fear of reprisals. In yet another incident in the same village the body of one Dashir, who was also killed by the terrorists in 2001, kept lying in a cave near the village, yet no one came forward to report the incident.

There are innumerable instances of murders committed by terrorists where bodies were never recovered and the blame for such missing person has been put squarely upon the security forces. Now, that the people are opening up the actual level of atrocity perpetrated by the terrorists is coming to the fore.

This incident, also quoted by the Chief Minister in his address, aptly elucidates the nature of the problem. The unmarked graves are an offshoot of the unfortunate environment of terrorism that had plagued the State for more than two decades. There have been many incidents when locals have refused burial to terrorists in their graveyards and the Police had no option but to bury them in unmarked graves. There are other incidents of terrorist atrocity like the one narrated above. Under the circumstance ends of justice are not served by targeting only the security forces whose image is unnecessarily taking a severe beating. While conducting an inquiry into the nature and scope of the problem, it has to be ensured that false propaganda leading to vilification of security forces and government agencies is not allowed to gain credence and the truth is pursued with utmost vigour.