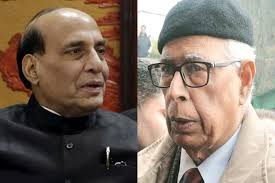 By opting for Governors Rule in the state of Jammu and Kashmir, the Union Government has demonstrated a will to take a righteous and justified stand to address the sensitive situation prevalent in the state, especially so, in the Kashmir Valley. This is probably the first instant in the history of independent India where the centre has shed its own government in a state for the larger good of the people. Calling off the suspension of operations that had been put into effect during the month of Ramzan was also a courageous decision and a need of the hour.

Some were of the view that the security forces will use the twin decisions as a leverage to launch suppressive operations. Nothing of this sort has happened!! The operations have remained sustained and relentless undoubtedly but with the same degree of professionalism and humanitarian concern as was seen earlier. Every effort is being made to ensure zero collateral damage and also to motivate the misled youth into rejoining the mainstream.

While pressure is being maintained on terrorists, the Union Government has very rightly declined getting into fruitless talks with divisive elements like the separatists. It is notable that in mid-2017 the Government had made it clear in a forum none less than the Supreme Court that it is not willing to talk to the separatists of Kashmir who demand ‘Azaadi‘ (freedom). It is good to see that the stand has been maintained despite the pressure to relent that emanated from its coalition partner the Peoples Democratic Party (PDP).

The stand has been denounced by some with vested interests as a tough posture in dealing with the troubled political circumstances prevailing in the Kashmir Valley. It is, in fact, a step in the right direction. It needs to be acknowledged that the separatists have always maintained a singular agenda of laying seeds of divisiveness and dissension in Jammu and Kashmir. Fortunately, they have received success only in the Kashmir Valley and that too only to a limited degree. The rest of the state is an oasis of calm and wedded to Indian nationalism.

In any case the separatists stand irrelevant in the emerging Kashmir narrative. They have, for many years, been responsible for luring the youth of the Valley on to the path of terrorism. These boys have, however, outgrown their masters and become Frankenstein monsters with a radical Islamist agenda of their own. They have forsaken their age old enlightened and syncretic Sufi culture in pursuit of a wholly alien and repressive Wahabi-Salafi form of Islam. The new lot, which has cropped up recently, follows the ideology propounded by the likes of Zakir Musa who spearheaded an Islamic revivalist movement in September-October 2017, much to the dismay of the Hurriyat as well as the Hizbul Mujahedeen with whom he was earlier aligned.  “The objective of the ongoing militancy in Kashmir is imposition of Sharia and not creation of a new secular state,” said Zakir Musa. Later, the killing of a Hurriyat leader Mohammad Yousuf Rather in February 2018 came as an indication of the seriousness with which he is pursuing his ideology.

The actions of this set of terrorists have the indiscriminate and brutal signature of the international terrorist organisation that they emulate. The cold blooded and vicious murder of a young Kashmiri Indian Army officer, Lieutenant Umar Fayaz and the brave soldier Aurangzeb in recent days was an indicator of the extent to which these radical forces in Kashmir can go in pursuit of their evil agenda. Kashmiri killing Kashmir emerged as a new normal over there.

It is to the credit of the security forces that they have killed the perpetrators of the brutal murder of , Lieutenant Umar Fayaz and sent a message that such acts will not remain unpunished. It is a matter of time before Zakir Musa also meets his just end. What is required now is a massive awareness campaign to wean away such young boys who are getting swayed into pursuing this self destructive path of terrorism. Fortunately, the numbers of such radicalised elements are small, which makes such an initiative a distinct possibility.  In the meantime the security forces have no option but to neutralise the threat to the common man being caused by the new born terrorist. Against this backdrop, continuation of the counter-terrorist operations becomes imperative.

Demonising of the security forces for doing their job is a part of the overall plan of inimical forces to stoke the fires of dissent and disruption. The idea is to remove fear of the security forces from the minds of the people and replace it with fear of the terrorists and the goons of separatist forces. The fact that the security forces are exercising commendable restraint and exhibiting a rare degree of humanity in the face of grave provocation is seen and appreciated by a vast majority within the Kashmir valley, the state of Jammu and Kashmir and the nation at large. All right thinking person’s can see that the Army is carrying out determined counter terrorist operations despite the interference of stone pelting mobs.  Respect to human rights is central in the conduct of these security functions. This needs to be pursued since it will reap long term benefit in the sphere of the “hearts battle.”

Very soon the security forces will, yet again, create a stable environment for the political process to be initiated. It is hoped that the government will not lose out on the opportunity this time round as it has on many occasions earlier. Media will have a large role to play in the process of political re-emergence. It can either pursue the facts or run the path of sensationalism. Presently the bias is towards the later; it can only be hoped that things will take a turn for the better.

The government would be well advised to carry on regardless on the difficult path that it has chosen. It is bound to reap good results that would usher peace and prosperity in the state.

(Jasbir Sarai is a senior activist of the Aam Aadmi Party)