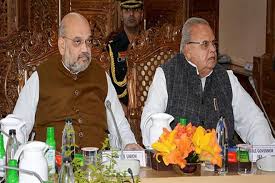 Union Home Minister, Amit Shah, chose to visit Kashmir before his maiden address in Parliament. Apparently, he wished to get a grip of the situation there before speaking. He sat through a detailed briefing on all political, social and security aspects with emphasis on the current security situation. In his missive to the administration and security forces, while reiterating the Government’s policy of zero tolerance to terrorism, he dwelled on giving due importance to putting a plug on the recruitment of local terrorists and removing the disillusionment of the people; he also asked the administration to plug terror funding and enforce rule of law in the state.

In his maiden speech in parliament as Home Minister, on the issue of Kashmir he made three important statements.

“I want to tell people that (the) Narendra Modi government has adopted zero tolerance policy towards terrorism and that will continue.”

“Article 370 is not permanent; we have not changed our stand on it.”

“Whenever the Election Commission says, we will conduct elections in the state. We want to restore peace in the state”.

The policy of the newly elected NDA-2 Government at the centre is based on the twin prongs of addressing and removing the disenchantment of the people and weaning the youth away from the path of terrorism. Self sufficiency has emerged as the mainstay of the development process, more so in the Kashmir Valley.  Gainful employment and empowerment at the grass roots are the conduits that have been identified to steer this process to its logical conclusion. To accomplish this the government is willing to go the extra mile, it is now up to the people to also move ahead to avail this very good opportunity.

The military, political and diplomatic misadventures that Pakistan has a proclivity to indulge in are receiving great punishment along the Line of Control (LOC). The Home Minister has asked the Army and the Border Security Force (BSF) to explore ways to completely stop infiltration along the LoC and the International Border (IB).  .

The remnants of terrorism in the hinterland of the Kashmir Valley are being actively engaging and eliminated despite all odds. Counter-terrorist operations in the hinterland in Kashmir spearheaded by the Indian Army and conducted with complete support of Jammu Kashmir Police (JKP), paramilitary forces and the local populace, have witnessed astounding results.  Reports suggest that more than 120 terrorists, including senior commanders of foreign origin have been eliminated in this year itself. The intention of clearing the region of the scourge of terrorism before the end of this year is quite visible.

When terrorists of local origin come in the dragnet of the security forces, people gather into a crowd, pelt stones and interfere in the operation in a desperate bid to save them. The security forces have complete sanction from the government to carry on with their work regardless of this interference. Pressure from the media and other political avenues is not being allowed to play on the minds of the security forces.  Of course, standard operating procedures are in place to keep the locals at bay while ensuring their safety.

In the realm of dialogue the government has, despite pressure from many quarters, maintained a righteous stand of not opening talks with separatist, secessionist and criminal elements on their terms. The Hurriyat has recently attempted to pressurise the government into talks by misleading Governor Satya Pal Malik, but the government sent a firm message that talks can be held only if the leaders of the conglomerate commit themselves to loyalty to the Constitution. This firm stand has taken the wind out of the sails of the duplicitous posturing of the Hurriyat.

On the diplomatic front, Prime Minister Narendra Modi has received great accolades in the recently held meetings of the Shanghai Cooperation Organisation (SCO) and the G-20. He has successfully convinced the world leaders to come together in the fight against terrorism and Pakistan has been universally identified as the chief global sponsor of terror. Pakistan, as such, is becoming quite isolated worldwide as its perfidy gets exposed more and more.

It is heartening to see the government at the centre exhibit such clarity of mind and confidence in dealing with the situation in trouble torn Kashmir. While, on the one hand, the government has given an open ended sanction to the security forces to eliminate the cult of terrorism and tackle violence and disruption with a firm hand, on the other hand, it is pursuing its development agenda aggressively. Undoubtedly, there is political and social pressure accentuated by a shrill media, but it has not deterred the government from pursuing a well laid out policy and consistent posture with a transparent approach. One gets an impression that the government is quite sure of getting the desired result of ushering peace and development in the trouble torn region sooner than later.

Certain pressure groups within the country and outside are trying their level best to derail the initiative of the government. A sustained campaign is in place to denounce its policy as tough and inflexible. It is for the better that the government has chosen to ignore the diatribe and carry on with its firm, unambiguous and righteous policy which is, most importantly, producing the desired results on ground. The negative campaign which is eliciting great public outrage will die down sooner than later.

Gone are the days when the separatists and the terrorist had their individual space and tremendous support from Pakistan. They worked in tandem with a singular objective of wresting Kashmir from India. The government today has charted a path that meets the aspirations of the people by providing to them what them need the most – peace and development. Under the prevailing circumstances, the anti-national and anti-Kashmir forces stand isolated and defeated.  An ability to sustain its confidence is bound to reap good results..