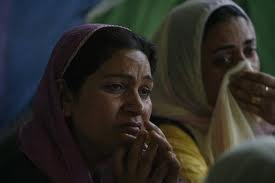 Arifa and Akhtar, daughters of Ghulam Nabi Dar, were gunned down by three terrorists, including a Pakistani, at around 10 p.m. on Monday, February, 01, at Muslim Peer in Sopore, Kashmir. Three terrorists of the dreaded Pakistan sponsored organization Lashkar-e-Toiba barged into the house of he girls and forcibly abducted them. Later they were mercilessly shot dead near a Ziarat (Holy shrine). The motive behind the murder could not be immediately ascertained but, whatsoever it may be, a barbaric action of this nature cannot be condoned. The Chief Minister Omar Abdullah has strongly condemned the gruesome murder and there prevails a sense of outrage across the country. The separatists have unfortunately not come out openly to express their views on the incident. The incident further strengthens the position taken by the security forces against any hasty decision for withdrawal of troops or revocation of special powers conferred upon the security forces to effectively deal with terrorism in the State. (Image courtesy South Asia Ideas)