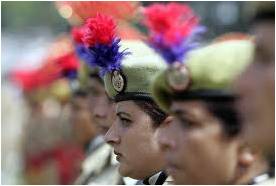 Ahead of the 65th Independence Day celebrations in Jammu and Kashmir on August, 15, elaborate security arrangements have been made across the State particularly around Bakshi Stadium in the Valley, where the main Independence Day function will be held and where Chief Minister Omar Abdullah would unfurl the Tri-colour. JK Police has laid out a three tier security system in the venue. Closed circuit television cameras (CCTVs) have been installed and anti–sabotage mechanism is also in place to ensure a peaceful function. The Army and Paramilitary Forces are on high alert across the State to offset any plans by terrorists.

In times like this one would expect that the leadership of the State would assist the government in maintaining law and order, unfortunately, this is not the case. The separatists have already given some very belligerent statements and called for a Bandh on the day. Syed Ali Shah Geelani has gone to the extent of felicitating Pakistan on its independence and in the same breath stating the Indian has no right to celebrate independence as long as it is “Occupying Kashmir”. One wonders as to why Geelani is silent about Pakistan’s colonisation of the Northern Areas. It is high time for the Indian government to find ways and means of putting a lid on such seditious activities that are taking place in Kashmir with impunity.