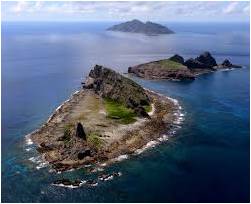 China is positioning itself as a super power that will, in time, contest the unilateral power status of the United States. Such a posture has been extensively written about and speculated upon. The question that now arises is – How will China leverage this position if, as and when it attains the same. China’s growing belligerence in its immediate neighbourhood and beyond does not give an indication of it taking on the mantle with responsibility and maturity.

The latest spat between China and Japan over small, mostly uninhabited island strips has caused tension and concern in international circles. The real estate in question is known as Senkaku islands in Japan, Diaoyu in China and Tiaoyutai Islands in Taiwan. Historically, this group of islands has been controlled by Japan since 1895; it was as late as 1971 that China staked its claim on the islands, probably because of their economic potential being rich in oil, minerals and fishing potential. However, in 1972, China and Japan established diplomatic relations after an agreement to shelve the dispute for a settlement sometime in the future. It seems that now, in view of its burgeoning power, China feels confident enough to raise the issue once again

The recent spat escalated almost to the level of open war mongering; Japan activated its fighter aircraft after Chinese Marine Surveillance aircraft flew over the islands for the first time since 1958. The United States expressed concern over the development but left things at that in order to avoid escalation of tension. What is of strategic significance over here is that the islands are included within the US-Japan Security Treaty which implies that the US will have to come across in defense of the real estate should it come under threat. Thus, even if it wishes to stay out of the dispute the US cannot do so.

After having initiated the hostilities China embarked on a massive media campaign through the government’s captive media, to justify its action. Chinese newspapers denounced Japan as arrogant and put the blame for the tension squarely on the shoulders of the Japanese Prime Minister Shinzo Abe; Japan’s so called arrogance was further attributed to intensification of its military cooperation with the United States which, according to Chinese newspapers, has given to the country the motivation to adopt a right wing approach. Having laid the blame on Japan, Chinese newspapers openly declared the intention of the country to resort to war in case things do not go their way.

The Japanese response was more muted and diplomatic, while reiterating the need to enhance national capacity to protect its territory the Japanese media advocated proactive diplomacy to put bilateral relations with China back on track and use the disputed real estate for the benefit of both countries. Having said so, the Japanese Prime Minister is quietly visiting other countries in the South China Sea to get them on board towards challenging Chinas growing intransigence in the region.

An important aspect is China’s lack of capability to walk the talk so far as its sabre rattling is concerned. Undoubtedly, the country has spent and continues to spend excessively on modernisation of its forces but the fact remains that this is one army that has not seen active operations since the debacle against Vietnam in 1979. The military leadership is said to be highly politicised; senior ranks are attained, not on merit, but on contacts within the party. The “princeling” system, now well entrenched in the political hierarchy, is quite rampant in the army also. The generals lack experience in basic forms of warfare not to speak of the complicated tri-service environment or the strategic imperatives of a complex conflict over multiple fronts. In military operations technology plays a subservient role to the human resource, it is the man behind the machine and not the machine which counts. In China the man has not been put through the test of fire.

So far as India is concerned China has, for long, been playing a dangerous game of strategic envelop; its closeness to Pakistan, literal taking over of vast tracks of land in Gilgit-Baltistan and Shaksgam valley and presence in Pakistan Occupied Kashmir have raised the heckles of the Indian establishment time and again. China has also extended itself to countries like Myanmar, Nepal and Sri Lanka; it is always looking for ways and means to isolate India from its neighbours and institute a strategic take over in the region. This apart, growing Chinese obduracy with regard to the border dispute and open belligerence on the line of actual control are reasons to be very worried about.

India, therefore, needs to respond proactively to the escalation of tension in the extended neighbourhood of South East Asia. To this extent the summit held in New Delhi with ASEAN in November, 2012, with the intention of upgrading relations to a strategic partnership is a step in the right direction. Even the US is trying to enhance its ties with ASEAN to stoke its own economic growth and at the same time counter China’s expansionist designs. India is in a position to play a positive role but, most importantly, its response should not come across as toeing the US line.

The time to look at China closely has arrived; that the country cannot be taken lightly is well known but to attribute to it more than its capability would also be erroneous. The best option is to study each development and react in a manner that is pragmatic and in the interest of India, its neighbourhood, the entire South Asian region and of course the global community. India needs to leverage its position as a global and regional power in a sensitive and mature manner; ultimately in the wake of growing Chinese power it is values and righteousness which should emerge as guiding principles of India’s South Asian Policy.