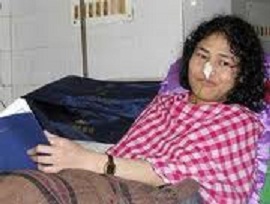 After dedicating a decade plus of her life for her people, Irom Sharmila has, recently, struck a personal and emotional cord by making public her love for one Desmond Coutinho, a 48-year-old writer and activist whom she met in March this year after a yearlong exchange of handwritten letters. One would like to wish her the very best, but for the knowledge that tragedy is lurking in the corners of her eventful existence yet again. She has treaded on this path in the hope that, as a sequel to the Anna wave, her demand for repeal of the Armed Forces Special Powers Act (AFSPA) in her home State, Manipur, will also be met and then she will be free to lead a normal life. This may not happen in the near future due to a number of reasons.

During the ten years since Irom Sharmila took an emotionally charged decision to go on a fast, the environment in her home State has changed beyond recognition. Manipur today is riddled with the ills of looting, kidnapping and extortion carried out by a number of insurgent groups. Most people who can afford to move out from the State and relocate elsewhere are doing so. Those still residing in the State are paying heavy amounts as protection money to the insurgent groups. The insurgent groups, in turn, are using the money collected to purchase large tracts of land in West Bengal, Sikkim and the rest of India. On the pretext of the prevailing disturbed situation, the State government is receiving large sums as dole from the Central Government which, probably, lines the pockets of the politicians. Some politicians are even believed to have a nexus with the insurgents and they loot in tandem. The lot of the common man has deteriorated from bad to worse. The changed scenario in the State means that the cause espoused by Irom Sharmila has lost much of its relevance.

Let us now compare her cause with the “Anna” movement. What were the factors that led to the resounding success of the latter? Anna had a past for which the people knew him; he had well known people to project him and his cause to the masses and the media. The issue touched all rungs of society and the people identified with it. Overall Anna was a catalyst who fired up the masses. Most importantly, he recognised the time that was opportune to call off his agitation. He bowed to the dictates of reality and logistics and, at the same time, drove home his point well enough to find a place for himself in history. Herein lies the difference between Anna Hazare and Irom Sharmila. She has not been able to appreciate the right time to pull out.

One can imagine a host of alternate life scenarios for this dynamic lady. She could have chosen to serve her people by helping them distinguish the right from wrong and thus helped in creating an environment conducive for the repeal of AFSPA. Instead, she has thrust herself into a typical Catch-22 type of a situation, where neither can she move forward nor will her supporters allow her to step back. She has become a prisoner of her own cause. No doubt she has been nationally feted and internationally acknowledged, yet she remains nothing more than a poster girl. So much so that today when she has found the man whom she loves and would like to marry, her supporters have denied to him even access to her and in the process left her very embittered. So why is she bent upon being a martyr without a cause? As it is, she has wasted the most productive period of her life.

Today, Irom Sharmila is nothing more than a golden goose for the small group of people who surround her and control her actions. Should she choose to eschew her unavailing struggle and live her life with a more positive perspective, it is her supporters who would stand to lose all the aid and sympathy that they garner in her name.

In the final analysis it is the achievement that is counted, not the intention with which one works nor the sacrifices that one makes. Irom Sharmila is not being able to achieve because her cause is no longer relevant even to her State or her people much less the nation as a whole. Today, in Manipur, it is the much vilified Assam Rifles which is making the most sustained effort at maintaining peace and rehabilitating misled youth through counselling and vocational training. Those whom she is trying to dislodge have become the saviours of the people. Assam Rifles provides peace, security, economic boost, employment and whatever little development that is happening in the State. Why on earth will the people go against this organisation? The only thing that remains unchanged is her continuing fast. But one wonders after all, to what avail?

The central and the State governments, the media and more importantly the people of Manipur and the entire Nation have to get together and find ways and means to persuade Irom Sharmila to shed her misery. She has to be convinced that her issue is understood and respected and all efforts are being made to bring about an environment where her demands can be met. In the meantime, she would do herself and her people a great service by shedding the present self defeating path to lead a normal life, get married to the man she loves, have children and simultaneously work in areas that are beneficial for her people. It is time for her to move on.