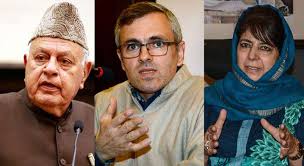 In Kashmir, there is a wide acceptance of covert assistance being provided to terrorist Tanzeems (groups) by a category of the local populace defined as Over Ground Workers (OGWs). Many among the OGWs are sympathisers to the cause of terrorism.  Hardliners do not exist only in the form of Jamiat or Hurriyat, they also exist among the locals including some disgruntled elements of JKP and other state departments. Also among the OGWs are those who are forced to follow this path due to fear of reprisals against the entire family on refusing to do so.

What has been going unnoticed, even in Delhi, is the alliances/nexus between local political parties and the terrorist Tanzeems.  Such alliances have been in play ever since 1989 and have only strengthened with time. To begin with, everyone in Srinagar knew that thousands of youth had crossed over to Pakistan for training as Mujahideen (Islamic militants) to initiate insurgency in the State. However, no political party, JKP or other intelligence agencies made any concerted attempt to check this outflow. It was a big intelligence failure that the country had experienced wherein everyone was caught sleeping, including the Army at the Line of Control. Kashmiri people remained mute to the entire affair thereby lending complete support to this anti-national cause. This led to the formation of the Nexus.

The catchy slogan of Mehbooba Mufti in South Kashmir during her canvassing, “Muje vote do main tumeh Azadi dunge”(give me votes and I will give you freedom) is a case in point. The slogan may have passed off as giving an assurance to the people of a better bargain after her coming to power, but it would have been interpreted in a very different manner by the separatists and the terrorists. This surprisingly fell to deaf ears in Delhi more so when South Kashmir, which is the bastion of the Hizbul Mujahedeen, is also constituency of PDP.

The desperation to form a Government in J&K further led to ignoring of this very visible affiliation by the ruling BJP.  As a result and as expected, the ‘Unholy Alliance’ did not last long as BJP became a restricting factor in the machinations of the PDP. This also led to emergence of a new BJP cadre in the valley.

Post reorganisation of the state into two Union Territories in August, 2019, many political leaders of Kashmir including those of so-called local mainstream parties were put under detention. Strangely, the detention was revoked after a short period of time with no plausible reasons being given. Were our intelligence agencies and advisors naïve enough to have recommended this release? It was perhaps done due to some limited and ill-conceived political gains or lack of foresight/knowledge of the happenings on ground.

There is every reason to believe that the nexus continues to exist in the form of affiliation of certain political elements with Tanzeems presently operative in the valley. Ajay Pandita alias “Bharti”– Sarpanch from South Kashmir Anantnag followed by Wasim Bari, his father and brother fell victims of the handiwork of these very affiliations. These murders have been carried out with a view to deter the emerging parties and cadres in the valley, besides ensuring the vested political agendas of the local mainstream parties.

Despite security been provided, these persons were killed with impunity. Those Kashmiris who had the confidence and guts to stand for the national cause were left to fend for themselves without adequate protection. Ten JKP personnel who were thereafter dismissed from service need to be closely examined for their possible involvement or inadvertent complacency. Moreover, the action of immediate release/claimed rescue of the Vice President, Municipal Committee Watergam, Baramulla and a BJP local leader Meraj Ud Din Malla by JKP muddies the water further.

It is imperative that NIA and the other intelligence agencies swing into serious action and keep these local political heads under constant surveillance. Such leaders have not only failed politically, but have turned anti-national in their vested interests that thrives on corruption. Their attempts to create disruption must be curtailed forthwith to stabilise the ongoing governance and instilling confidence in the masses who are left puzzled after the reorganisation of the State. Also, with time, the clever but failed politicians of old should be permanently taken off their pedestals and a new leadership should be given an opportunity to emerge.

Delhi cannot afford to bask in the glory of its mega political maneuver in August last year, especially when terrorism still exist and is again spreading both in South and North Kashmir. Kashmir issue cannot be deemed to be resolved till such time that terrorism prevails. Our political leaders need to lay down explicit instructions for the security forces to eliminate terrorism completely within a fixed time period and not left as an open ended venture till the cows come home.

Essential and meaningful political initiatives and processes need to be ensured simultaneously during this period to achieve complete resolution. This can only happen when Delhi spells out clear cut instructions and mandates. Infrastructure development and employment initiatives are some methods that will draw the youth and masses towards nationalism, progress, stability and away from the gun. The aspirations of the people lie in employment opportunities, meaningful governance, peace and stability and return of tourism.

It is also necessary to send out a message that statehood can only be thought of when everything on ground normalises including return of Kashmiri Pandits to the valley and integration of Gilgit-Baltistan with the region. It should be made to sink into the psyche of the people that the call for Azadi (freedom) from an established and thriving democratic nation has not only taken away their identity as a state, but destroyed the very fabric of Kashmiriyat.  Jammu Kashmir and Ladakh Union Territories possess the potential to convert themselves into world class regions and to be reestablished as “Heaven on Earth.” What is required is a concerted effort in this direction