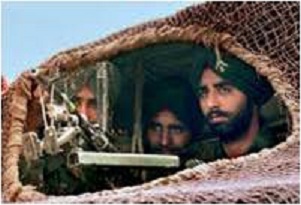 Recently, I had an opportunity to go through an article titled “Indian Army: little glory, lots of gore –1,” carried by The Kashmir Times, a well known Jammu based English daily. In the article the author, while referring to the Indian Army, says, “it maneuvers its ruthlessness in a continuum that is directly proportional to its operational distance from the national boundaries and, thus, earns a genial and almost affable image exactly where it matters.” Could somebody please explain to me what this implies? This is only one instance of the drama being played out through the media by some secessionist elements and disgruntled forces with no other work than to sit down with their dictionaries, find the most stringent and abusive words and fit them into an article about the security forces in Kashmir. Unfortunately for them, the lack of substance and deficiency in the English language leads to the production of some very pathetic copy; definitely not value for money for the readers.

Every military activity happening in the world is somehow applied to Kashmir; if there is talk of demilitarisation of the Gaza strip, automatically there is talk of demilitarization in the Kashmir Valley, if South Korea has set up a truth and reconciliation commission, so must one be set in Kashmir. In fact, a portion of the journalistic community and self styled defence and security analysts in Kashmir have, as yet, not been

able to decide whether the region is afflicted by militancy, insurgency, terrorism, internal strife or something else. These people throw around words without any thought to the difference in the meaning and the connotation. Things are spoken and written about simply for creating an impression.

The Indian army, in such articles, is made out to be some sort of an extra-constitutional entity out of the control of the government or the people of the nation and intent only towards the sadistic preoccupation of killing fellow citizens. The national and mainstream leadership of the state as also the military and police commanders constantly make sincere attempts to change the perception of these Nay Sayers but invariably hit upon a wall. Sage leaders and intellectuals may say anything under the sun to instil confidence in these so called misguided elements of society but it is simply not enough to make them see reason. If some leader, military or civilian, talks of say ‘zero tolerance to human rights violation’ he is dubbed a liar and a cheat. If nobody talks on the subject then the whole force is dubbed as insensitive and barbaric. Negativity is applied to all spheres of dialogue that the force or the political leadership attempts to open up in order to get its word across. It is quite evident that a particular section of people are simply not ready to look at the truth in the face. Thus, making wild allegations is the order of the day. These tend to give an impression that the moment an outsider would land in Kashmir he would be greeted by a hail of bullets and monster like men in uniform ready to kill anyone who gets into the sight.

Military activity is given a political hue with some outlandish ideas once again borrowed mostly from other regions of the world. It is said viagra uk that the voice of the Kashmiri is being subjugated a totalitarian state amongst many other names that have been given to Indian democracy like fascist, obscurantist, oppressive and what not. The fact, of course, is that Kashmir perhaps witnesses the maximum number of public protests and agitations in the whole country, probably in the entire democratic world. If blame has to be apportioned upon the state government and the security forces it would be more for allowing such unfettered intransigence rather than its oppression. But how to explain this to such people who wish to live with blinkers on or those who have sold their souls to the devil?

The fact is that the Indian Army has always been secular and apolitical and has functioned under the civilian authority exercised by the government of the day. It also comprises not of ogres but such Indians who come from villages akin to the ones found in Kashmir and the North-East. Many Kashmiri’s and people of the North-East are also a valuable part of the soldier’s fraternity. Soldiers are no different from those that they are said to be subjugating. One can only suggest to the authors of such wayward columns on to take on some genre of writing other than defence, security, geo-strategy and other such matters that they refer to so freely and loosely, these being quite Greek to them.

Peace is fast becoming a reality in Kashmir; unfortunately moving alongside is this wretched literary activity to denigrate those who have brought about this reality with their sweat and blood. What these brave and noble soldiers have done does not require verbose language to express; the truth speaks for itself. The effort to malign this work, however, needs to be high on rhetoric being low on substance. Despite all these writings tourists continue to throng the beautiful land clearly thus indicating the complete lack of seriousness with which the world looks upon this effort to distort reality. If sustainable peace is the dream of all Kashmiri’s then the first step should be abjuring of all attempts to spread hate and misinformation. One cannot deny to all citizens of the country the right to express themselves but, given the sensitivity involving defence and security, those writing on the subject need to be objective and circumspect in view of the onerous responsibility that they carry on their shoulders.