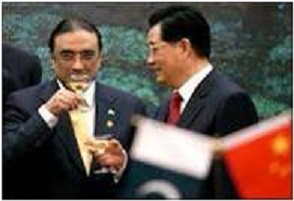 In a region where civilization dates back to almost five thousand years ago, a mere six decades is of almost no consequence when deciding or commenting upon the fate of a nation. However, one does wonder what the founding fathers of Pakistan, be it the ideologue-poet Muhammed Iqbal or the cynical statesman Muhammed Ali Jinnah, would have to say about Pakistan today considering that neither of them lived long enough to see the fruition of their dreams and the concrete shape that their vision ultimately took. Their dream of a modern Muslim homeland rooted in the tradition of brotherhood and propelled by modern tools of science and technology has today dissolved into an anarchic wasteland epitomised by infighting and so dependent upon foreign support for survival that it remains nothing more than a puppet in the hands of world powers. This in fact has been the only consistent reality of Pakistan. The civil and the military executive have always remained at war with each other with the balance tilting in favour of the one that enjoys foreign support.

The recent ‘Memogate’ scandal is proof enough of this. The revelation of an appeal made to the United States of America, in the wake of the assassination of Osama bin Laden, to help the civilian government survive a possible military coup has proved to be a world-wide embarrassment for the state of Pakistan and embroiled the government and the military in a never before face-off that has brought their differences to the fore and even involved the Judiciary. While speculation is rife within the media regarding the future of the Generals Kayani and Pasha with Gilani and Zardari issuing strong statements against the military establishment, the fact remains that in Pakistan the military has always been a power to be reckoned with and not one that can so easily be dispensed with. In the situation the possibility of a military coup remains very real.

Simultaneously, the presence of the foreign hand in the affairs of Pakistan is also in a state of flux. While the relations of the country with United States are slightly strained at the moment, there is visible warmth in the relations of the country with its long-time friend and ally China. During a recent visit of an emissary of the Chinese Government to Pakistan, the Chinese spokesperson, promised unstinting support to Pakistan and envisaged a larger role for Pakistan within the regional context. Whereas such a statement in the context of the coolness of relations with the United States, must have come as much needed succour for the state of Pakistan, it is hardly anything to be overjoyed about.

Countries like China and the United States of America are selfish to the core and seldom think of anything beyond their personal interest and the satisfaction of their goals – be it in world politics or regional politics. When the United States needed a base to contain the rising influence of USSR in the region of South Asia, it made use of Pakistan by providing it with military aid to be used against the Soviet supported regime in Pakistan. Today when China needs Pakistan to contain the rising influence of India in South as well as East Asia, again Pakistan has become a tool in the hands of another aspiring world power.

The result of the aid provided by United States both overtly and covertly is there for all to see. A state that had once aspired to be a forward looking and propelled by modern scientific thinking is in the grip of fundamentalism that is likely to take it back to the Middle Ages. Democracy and civil governance has become a myth and the common man is bereft of even basic necessities like food shelter and livelihood just because all financial aid is being appropriated by the military. The result is a largely frustrated population with a few power hungry individuals who control the land as well as the money. Doubtless, the support being offered by China is only likely to aggravate this situation, for the Dragon is certainly no friend of the common man in Pakistan.

The question then arises – why has Pakistan ended up in this conundrum like situation out of which there seems no way out. The answer is fairly simple. Instead of concentrating on its own development, Pakistan has constantly remained preoccupied with creating some kind of instability in India. It has maintained this posture largely because its raison d’tre remains anti-India. Now if Pakistan were to just give up on its this policy of trying to create problems in India, it would have millions of rupees free to spend on the provision of basic services to its population and the laying down of basic infrastructure that would aid development in the country. He Army would also lose a great deal of the importance

that it has create for itself with some very professional psychological conditioning of the Nation. Not only that, friendly relations with India would also result in better trade links between the two countries leading to economic benefit to both.

Pakistan urgently needs a breakdown of the feudal, self serving nexus that exists in country whose major beneficiaries are the military and political leadership playing in the hands of some foreign power or the other. Things can improve only if the leadership learns to place the masses and their welfare before its own self-aggrandisement. Sadly, the reality of the fortress like mansions, the sprawling houses in the salubrious suburbs of England, the money stashed away in Swiss bank accounts that supports the opulent lifestyles of a select few makes this a rather improbably option. Whether the present state of affairs in the country will allow a committed leadership to emerge remains to be seen.