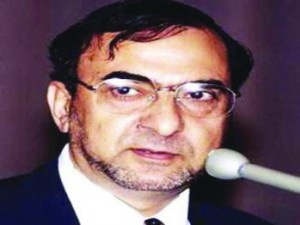 The recently held elections for the so called Azad Jammu Kashmir (AJK) Legislative Assembly, which is actually Pakistan held Kashmir, have once again exposed the double standards of Pakistan. Democracy in Pakistan is much abused, fragile and fraught with contradictions. It never had any true admirer or elicited any genuine respect even from the people it represented. The recent elections in AJK proved that democracy is even more abused over there. The current election saw postponing of the voting as the MQM withdrew support from the PPP government at the centre and opposed voting, which lead to violence. The final voting could take place only after a settlement was reached between the PPP and MQM. Since when have democracies postponed elections to facilitate settlements between political parties?

The AJK Legislative Assembly, as it exists today, has 49 members representing both the residents and migrants across Pakistan. 41 members are directly elected through adult franchise whereas eight are appointed members like women and technocrats. Throughout the world every democratic nation has a Parliament with the majority leader as Prime Minister and President as head of state; it is only AJK where this system is followed in a Province for the specific purpose of misguiding the global community.

The result of the sham election in AJK is on expected lines. 29 seats have been won by PPP (The party ruling at the centre), 11 by PML (N), four by Muslim Conference, two by MQM and one female member by APHC. It is worth mentioning that the 12 migrant seats of AJK Assembly have always been won by the ruling party of Islamabad and these seats play a decisive role in government formation. The trend has been applicable this time also and as per tradition PPP has wrested full control over AJK.

Notwithstanding the sham of elections and high sounding appointments of the office bearers, history stands testimony to the fact that the government of Pakistan invariably exerts complete control over the administration of AJK. The Prime Minister of AJK has, on many occasions, been changed by the central government at its whim and fancy. The concept of basic democracy is a charade as the locals have been slowly subjugated by Pakhtoons and Punjabis in a sustained and diabolic attempt to change the demographic pattern in the region. Now this migrant population will also get voting rights in AJK and the actual voice of the people will be subjugated. This is a travesty of democratic norms which calls for international intervention to address the plight of the subjugated people. The mandate of this Assembly does cover the Northern Areas of Gilgit and Baltistan, which are suffering from the most blatant form of colonisation by the Pakistani government with active connivance of China, the political shams being played out over there are absolutely repulsive.

The recent arrest of Gulam Nabi Fai by the Federal Bureau of Investigation in US has opened yet another Pandora’s Box. The great Indian liberals, whose heart bleeds for a small separatist segment of Kashmir, are falling one by one from their high moral chairs as the views on Kashmir propounded by them are getting exposed for their fallacy as well as duplicity. It is now common knowledge that on the one side Pakistan has infused million of dollars to build up a campaign of misinformation against India and exploited the same to gain support of US and Europe and on the other hand Pakistan is projecting itself to be a bigger victim of terror and exhibiting a desire to sit with India to resolve issues. There cannot be a better example of double speak..

The tragedy is that Kashmir is seen across the globe as a Muslim majority region under Hindu majority India which is willing to secede to a Muslim majority state. It is for this reason that the Indian perspective on Kashmir suffers from a credibility problem in international forums. The problem is that the reality of Kashmir is too complex and it needs patience and willingness to understand the same which generally cannot be expected from any foreign country’s parliamentarians or opinion makers. This has been the main problem with India in selling its side of story to the world.

Be that as it may, it is necessary for the world to take cognizance of the realities as they exist on ground. A good and honest effort was made by Baroness Nicolson in her report to the European Parliament in 2007, where she very well explained the legal and political basis of the Indian claim on the territories. She also elucidated the better condition of people in Jammu and Kashmir, under democratic dispensation of the Indian Union. The rights being enjoyed by Indian Kashmiri citizens was put across in the right perspective.

India has made no noise against the exploitation that Pakistan is indulging in its occupied territories. In the past also India did not voice its concern against the deliberate change of demography in these areas. Pakistan, on the other hand, has been leveraging assets like Fai; their reach and contacts help to shape a motivated perspective to the right people at right time. India has no option but to find a counter to this strategy. The Indian government can no longer afford to stay complacent to the machinations of the Pakistani establishment at the regional and the global level. It is time to ensure that the world gets to know about the realities of Pakistan occupied territories of Kashmir and Northern Areas. We cannot allow people like Fai to exploit our basic decency with open attempts to malign us and cause harm to our citizens. Now we must expose Pakistan’s dubious games in AJK, Northern Areas as also in all those territories of Kashmir that are under the jurisdiction of the Indian Union where a segment of vested interests has been created and sustained to engineer civil disorder.