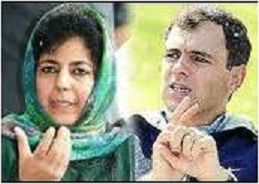 “If there is paradise on earth, it is this, it is this, it is this.” Thus goes the catch line of an advertisement by the Ministry of Tourism designed to market the charms of the state of Jammu and Kashmir. Indeed the snap shots of the calm and tranquil Dal Lake, the Shikaras, the apples and the majestic snow-capped peaks of the Himalayas in the backdrop do convince the viewer of the sanctity of the statement, but only momentarily; for soon enough the newspaper reports delineating the volatile situation in the valley intrude upon the canvas of the mind and the image of a raging inferno replaces that of the clear and tranquil depths of the Dal Lake. Indeed, it is true that images created in the mind of the common man by the media whether rational or exaggerated are neither easy to erase nor replace.

For too long has the valley of Kashmir been associated with violence and atrocities in the mind of the global population.

In fact, such is the vivid image of unrest held by the whole world that selling it as a tourist hotspot akin to paradise has today become a contradiction in terms, something which does not gel with the pattern that has been formed in the minds of the people. There are reasons that account for the emergence of such a scenario just as there is a lesson to be learnt from them.

This is, in fact, a classic case of chopping off one’s nose to spite one’s face. For limited short term goals and empty publicity, the leadership in the region, more prominently the party in the opposition and the separatists, have done untold harm not only to the image of Kashmir in the minds of the people but have also, in the process, ripped apart the socio-cultural fabric of the valley. A whole generation has been born and grown up under the shadow of the gun. what is domain . Envisage for instance how every morning during the past two decades, innumerable young girls must have avoided stepping out of their homes for fear of being waylaid, assaulted and raped.

Who one wonders will take the responsibility of the psychological damage that they are likely to have suffered? And is there someone to take cognizance of the fact that such damaged and warped psyches will be giving birth to and raising further generations in this land comparable to paradise? What then will be the future of those generations? Is there anyone who has spared a thought for them? Sadly enough, no one really seems to care. The leadership of Kashmir is busy carrying a frown on the forehead and waxing eloquent about all the ills that signify the State without raising a finger to address them. Their work starts and ends with the attendant blame game. The separatists are only interested in influencing world opinion against the Indian Government by raking up issues such as violation of human rights and an anti-India public opinion, the mainstream leadership his kept busy countering the propagandist tenor of the separatist campaign. All of these actors together created an image of Kashmir as a

hell hole rife with conflict and ready to blow up at a moment’s notice. No wonder that this beautiful land is regarded as a nuclear flashpoint in the world and after all this they wish to invite tourists to their State.

It is time the leadership in the State wakes up to face the actual realities. Instead of bemoaning and reviling the presence of security forces and the alleged interference of the central government they should concern themselves with, once again, picking up the process of rebuilding the socio-economic fabric of the devastated region. The first step would be to acknowledge their mistake and express the desire to atone for it. All the young boys and girls who have been denied access to education and a secure social environment due to the debilitating circumstances; all the infrastructural development that has suffered in the last two decades and is crying for attention: all that needs to be done to bring about a feeling of security and rule of law in the psyche of the people: these are the issues that the stakeholders of Kashmir should be concerning themselves with. It serves no purpose in making vain attempts to sideline their incompetence and petty thought process by targeting the security forces and the central government. Both these establishments would be the happiest if Kashmir can get its act together and learn to handle its affairs on its own.

After the Second World War, when Japan was denied the right to maintain security forces, the country turned the adverse circumstance into opportunity and instead of lamenting the security umbrella provided by the United States, it concentrated on a fast paced industrial development. The result is there for all to see. tcaps cloud Kashmir too is fortunate enough to have the elite Indian security forces looking after its security interests in an extremely volatile and inimical macro-regional environment comprising both the strife-torn Pakistan and Afghanistan. The State should send up a prayer of thanks to the Almighty for this fortuitous turn of events and should with a free mind make use of this situation to concentrate on its overall development and providing a much needed healing touch to the region as a whole.

The onus for taking initiative rests on the leadership of the State. After all they are the ones who are responsible for discharging the role of providing a dignified existence to the people whom they profess to lead. The government has the maximum role to play but it can do so only if the opposition, whether it is the mainstream or the separatists, also takes congnisance of their responsibilities. It is indeed high time that some concrete action, beyond short sighted politics, is taken to improve upon the situation in Kashmir.