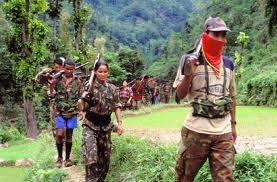 The central government, after much speculation, media postulations and tough talk over the last one year, seems to be ready to crack the whip on the Maoists in the country’s worst affected Central Indian Region of Chattisgarh. As per reports, the Army is poised to set up a Counter Insurgency Training School in Narayanpur district, along the edges of Abhujmard – a Maoist-controlled forest plateau straddling Chhattisgarh and Maharashtra.

A team from the Army’s Central Command has already reached Kondagaon, a small town on the Raipur-Jagadalpur road before heading towards the 4,000 square km Abujmard forest that had earlier been declared a “liberated zone” by the CPI(M). In December last year, the Army had acquired over 100 acres of land on the edge of Abujmard for setting up the said counter insurgency school. The prelude to this move is the massacre of over 100 paramilitary troopers in Chhattisgarh alone (including 27 of the CRPF in Narayanpur itself) in the previous year which led to a national outrage and distress calls to deploy the Army alongside the paramilitary forces.

Expectedly, the Maoist guerrilla organisation has declared its vehement opposition to the move, describing it as the first step towards eventual deployment of Army in anti-Maoist operations. The Army, on its part, has categorically stated that the proposed facilities are for training purposes only. In a press conference on January 14, the Army Chief, General VK Singh, stated that the Army was “neither operating in the area nor seeking protection under the AFSPA.” The Maoists, however, appear unconvinced and in a recent press release, Maoist spokesperson Guda Usendi said that the Union government was preparing to use the Army to wage war on its own people, adding that `this deployment would eventually result in the imposition of the Armed Forces (Special Powers) Act (AFSPA) in Chhattisgarh and lead to a “civil war” in Central India.

The Maoists have also questioned the right of the government to hand over tribal land to the Army and called upon people’s organisations and civil society to oppose the move. Significantly, they have stopped short of stating whether Army installations will be attacked or not. The Army on its part has sought clarifications from the Home Ministry on the rules of engagement and the right of retaliation, in the event of its forces being attacked.

While the army has sought to play down the move of this almost Brigade sized force sources in the security establishment feel that the training facility would necessitate creation of logistical support and a security umbrella. “This means the Army would first secure the Kondagaon-Narayanpur axis, placing a large number of troops in a series of camps, before it moves inwards in the foothills of Abujmard” explained a senior military official.

The Army’s reluctance for getting involved in active counter insurgency operations in the Naxal affected areas is well documented. This development has come about basically because the situation has shown no signs of improvement and there is a need to send in trained troops of both the State police and the Paramilitary cadre to combat this menace. At this stage the active participation of the army is nothing more than farfetched conjecture mainly because the conflict is, as yet, perceived to be controllable.

While one view is that the training facility will bring the army tantalisingly close to the Maoists, and hence could be part of future strategic positioning, another view is that the move is purely routine and linked to the country’s needs. “Since the army’s counter-insurgency training centre in Vairengte (Mizoram) is under great pressure, it had been scouting for training grounds in tropical forests, either in Orissa, Maharashtra, Jharkhand or Chhattisgarh,” said Ajai Sahni, executive director, Institute for Conflict Management, and a security expert. ”This base was in the pipeline for several years. It is coincidental that it has come through now,” he added .

Whether strategic or routine, the army’s move into Bastar would be significant, both in terms of bringing up the economy of the area, as well as shifting focus to this trouble torn region. There is no denying that the country as well as the world will be eagerly watching the development. In the words of Brigadier (retired), B K Ponwar, security adviser to the government of Chattisgarh, ”This will be the first time that any sizeable strength of the Army moves into this region. The deployments will indeed open up the region to the outside world. Purchase of local materials and supplies will bring in jobs and finance to cash-strapped villages. Army’s presence will also bring a feeling of security to the villages.”

The Chhattisgarh government, on its part, has laid down stringent conditions while allocating land. No felling of trees, no displacement of people, and no live firing. ”Drills at this base won’t involve firing, but what if our men come under attack?” asked an Army officer? This basic question, if seen in the light of past experiences and simple rationale of self defence, answers itself – No Army accepts unreasonable casualties, without retaining the capability of inflicting the same, many time over, on its opponent . Probably, even the Maoists know it and are, hence, worried like hell. As pointed out by Mr Ajai Sahni, “Look at this in the light of psychological warfare. It is like telling the Maoists, the tiger is outside your den, so beware !

This development does not, by any means, imply a de facto tactical deployment of the Army in Chhattisgarh. Yet there is no denying that the Army is moving into what is arguably the strongest military base of Maoists, though not for combat at this point in time. This does constitute a bold step in the right direction. Only time will tell how successful this strategy will be and whether it can be adopted for quelling internal strife in the rest of the country also.