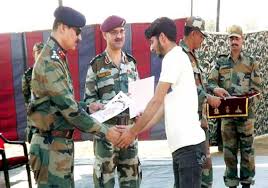 The Kashmir Valley is limping back to normalcy after a month and a half of an unfortunate, mindless and avoidable state of violence.

A negative impact of this period of madness may be seen on the very close bond between the Indian Army and the people of Kashmir.

The army has not been involved in the current face off between the security forces and some misled agitators, yet, it is being apportioned a larger blame on being enveloped into the larger definition of “security forces.”

The people of Kashmir understand this and do not hold much animosity against the army but constant targeting by the media in a propagandist manner takes its toll.

It is commonly said that the heavy hand of the security forces is responsible for many young boys taking the path of militancy. This narrative is likely to gain momentum in the post-violence scenario now unfolding. It will be said that many who have suffered in the violence have joined militancy in order to take “revenge.”

What is conveniently forgotten while espousing this narrative is that the army has been instrumental in weaning away a very large segment of the youth from the path of militancy.

The initiatives that the army takes under its flagship civilian welfare project, Operation Sadbhavna, brings it into close contact with the youth of Jammu and Kashmir. The many sporting and vocational training activities carried out under Operation Sadbhavna and the assistance provided in medical and other spheres gives to the army an opportunity to interact with the youth and set them on the path of productivity and progress.

While talking of the few who join militancy the media casually sidelines the story of the many who do not.

The Indian Army and the people of Jammu and Kashmir have truly been friends and partners through all travails and challenges that the state and its people have faced during this period.

Jammu and Kashmir is a border state sharing boundaries with two inimical neighbours. These borders are not permanent and as such they remain volatile and dynamic.  The Indian army has remained steadfast in maintaining the sanctity of the borders and thus protecting the people of the state from the malevolent intentions of the enemy across.

The enemy made four attempts after the war of 1947-48 to dissect the state. All attempts were made with great planning and deliberation. The Indian Army and the people of the state were steadfast in thwarting all the attempts and the enemy had to retreat defeated, disillusioned and demoralised.

Having realised the futility of an open conflict the enemy resorted to immoral underhand means to create divisiveness and dissent in Jammu and Kashmir. Terrorism was inflicted upon the state in the garb of home grown insurgency. The objective was to break the bond between the soldier and the people of the state.

Jammu and Kashmir has paid a terrible price in terms of loss of life, destruction of property and human misery due to this evil agenda of the enemy.

However, the unremitting will of the people, their belief in the values of freedom enshrined in the Constitution of India and the steadfastness of the Indian Army ensured that these evil designs of the enemy were also defeated.

The state of Jammu and Kashmir has a proud and historic tradition of making meaningful contribution to the Indian Army for defense of the Nation.

The Jammu and Kashmir Light Infantry, which has its Regimental Centre and training area in the Kashmir Valley and which draws troops from all three regions of the state has the honour of being the most decorated Infantry regiment of free India. Such a great honour for such a new and fledgling regiment in unprecedented in the annals of military history.

Apart from the Infantry, all three regions are contributing meaningfully to all other arms and services of the Indian Army.

Those citizens of Jammu and Kashmir, especially the Kashmir Valley, make a big contribution towards maintaining logistics for the army in the harsh terrain that marks the region.

Civilians work as porters and provide their ponies in the mountainous regions; young boys service the transport needs by Civil Hired Transport; many traders are involved in providing supplies. All join together to make the Indian army the formidable fighting machine that it is today in the state.

By using these assets, the Army is creating meaningful employment for the locals while also relating with them very closely and contributing to the economy of the state.

In times of natural disasters the Indian Army has come to the assistance of the people of Jammu and Kashmir unilaterally and spontaneously. Mostly the Army has itself been a victim of the disaster having suffered the wrath of nature in equal measure with the people. It has always put its own pain aside to assist in the larger cause of the common man.

This has never been done with an intention of winning any accolades; it is a spontaneous reaction to assist a friend in need.

Now, as the Kashmir valley limps back to normalcy, It is only natural that while the routine activities resume the scars will remain for a long time. Those who have lost their family members and friends and those who have been injured have an uphill task in picking up the threads of their lives. In this category come the civilians and the security forces that have sustained damage in equal degree.

The enemy will use the present conditions to its advantage and make a concerted effort, once more, to somehow break this bond between the soldier and the people of Jammu and Kashmir. This is because of the realisation that till such time that the bond exists, its evil designs of breaking the state away from the Indian Union will never fructify.

The people of Kashmir should remain prepared for the propagandist machinations of the enemy and ensure that they do not come in the way of the bond between them and the security forces, especially the Indian Army.