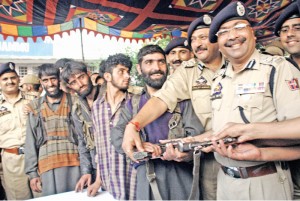 Mahore is a small township of Reasi, District Udhampur; it has been a hub of militancy and terrorism for a long time. Being Muslim dominated in an otherwise Hindu dominated area, it witnessed a sustained attempt by terrorists to weed out the minority community. A number of preplanned massacres and selective killings aimed at creating fear among Hindus and forcing them to migrate took place over here during the peak periods of militancy especially so in the beginning of this millennium. A few prominent incidents which exemplify the state of affairs is two determined attacks to massacre civilians on June 4, and August, 01, 200. Alertness of the Village Defence Committee (VDC) members foiled the move; another incident in the same month involved the shooting of two young girls, who due to their timely shifting to Jammu survived.

Mahore is once again in the news but for all good reasons. Four top Hizbul Mujahideen (HM) terrorists surrendered before the security forces in Kulgam district on August, 18, in what is the biggest surrender in this year. Those who have surrendered include a Divisional Commander of the outfit, Mohammad Rafiq Sheikh alias Basharat, resident of Neoch, Mahore; Bashir Ahmad alias Rashid, also resident of Neoch, Mahore; Mohammad Maqbool alias Majid resident of Lar, Mahore and Mohammad Shafi alias Haroon Rashid resident of Deval, Mahore. The surrendered terrorists handed over two AK-47 rifles, seven magazines, an under barrel grenade launcher, five under barrel grenades, 118 AK rounds, one wireless set, one mobile phone, one battery and three pouches to the police.

mahore has traditionally been dominated by the terrorist cadre of the HM, especially so the Pir Panjal Regiment {HM (PPR)} of the outfit. A large number of the cadre had received training in Pakistan as was the case with Mohammad Rafiq Sheikh who has now surrendered after attaining the coveted post of Divisional Commander within the outfit. He had received training in Pakistan from 1992 to 1995 after which he had been inducted back and had been operating in the area for the last sixteen years. After the killing of a terrorist called Badshah Khan he was appointed as a District Commander with another terrorist called Saddam was the Divisional Commander. Later Saddam was also killed in an operation and Sheikh went on to become the Divisional Commander with Reasi, Ramban and Kulgam in his control. The second surrendered terrorist Bashir Ahmed has also active since the year 2000; Mohammad Safi joined up in 2009 while Mohammad Maqbool has been in the line only for one year.

The fact that two of the surrendered terrorists had been in the fold of the HM for a short period of time indicates the complete lack of faith in the organisation amongst the locals who only a few years back, were attracted towards it in hordes to respond to the call of Jihad. Now the strength of the terrorist who have received training and indoctrination across the border is nearing zero. Those who have been motivated locally have neither the commitment nor the will to sustain for a long period of time, they get lured by money more than ideology and when the heat turns on them they simply wilt under the pressure.

This surrender has come as a major blow to the already beleaguered HM and HM (PPR) and it seems that the presence of the outfit has been literally wiped out in Reasi. This is a major achievement for the government, the security forces and most of all the people of the region.

A number of factors are responsible for this turn of events. Overall it was the total rejection of the cult of the gun and the joining together of all communities to fight the common menace of terrorism that led to a change in the environment. Foremost in this regard is the bond between the people and the security forces. This bond led to the successful creation of VDC’s and the passage of timely intelligence to the security forces which, in turn, led to precision eradication of the terrorists in the region.

Good governance and a stable government also made a major contribution. The people now see a silver lining in the cloud and they wish to become a part of the development process, this has been most aptly indicated by the huge turnout in elections, especially so, in the recently held Panchayat polls when people showed their favour for devolution of power to the grass roots level, something unheard of just a few years back. The surrender and amnesty policy most vigorously pursued by Chief Minister Omar Abdullah has also been responsible in motivating local terrorists to shun the path of violence and opt for rehabilitation under the generous dispensation of the policy. They have, in no small measure, been motivated towards this path by their families.

It is now important to maintain the process of normalcy. While following the route of prosperity and development due attention has to be paid to maintain pressure on the remnants of terrorism while also ensuring that the scourge does not raise its evil head once again. It has to be kept in mind that forces across the border will not lose a single opportunity, however bleak, to revive terrorism in the region. The government, the people and the security forces deployed in the region need to keep up their alertness to ward off all inimical intentions of a determined enemy. It is also necessary to educate the youth about the danger of falling in the trap of the terrorists and Jihadi elements who are always on the lookout for new recruits. Terrorism has been contained but the time to sit back and relax has not arrived, the possibility of a relapse is high and it has to be countered with all the might at our disposal.