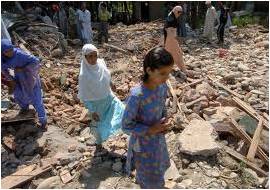 Some year back while passing through a remote village in J&K, I happened to go past a primary school. A group of small children was prancing around and a teacher perched on a plastic chair was looking after them. I was happy to see that even under the terrorist threat to close down all schools this teacher was bravely performing his noble task. Terrorists had burned down many school buildings in those days; these buildings, like most of other houses in this cold mountain region, are wooden structures and were very prone to fire. It was, therefore, quite easy for terrorists to show their strength with a simple matchstick; the end result was a beautifully school building going up in flame in minutes, leaving only a speck of ash. Many children from far off villages would trudge along steep ridge routes and over precarious bridges on deep nallahs to reach their school only to find only some patches of black burnt earth left; almost nothing left of the benches where some of them had so laboriously carved their names with small implements from their geometry boxes. There would be tears in their eyes and horrified look on their faces. The body language of their parents would show the deep anguish in their heart but they would never utter a word, lest their true emotions got exposed and someone in the crowd took it upon himself to tell the terrorists, that so and so was not happy with their act of violence.

It was against the background of such sentiments and thoughts that I stopped to ask the young teacher as to how the school was being run under such difficult circumstances. As we sat down side by side, he revealed tome the horrible truth that he was in fact, only a Matric pass and was sitting in for the actual teacher who was a government employee; the actual teacher stayed in some far off place and had sublet the job to him for Rs 1000/- per month. “The government teacher comes to the school only once in six months,” he said. He told me that terrorists also visited his village regularly and stayed on for a few days in one house or the other but since they ate and slept in his village and because he earned only a paltry sum by his vocation, they were considerate enough to let things be as they were. He had enrolled many children from nearby villages who never came to school but were listed in his register to maintain the viability of the institution and make it eligible for other benefits from the government. This story of fake teachers and fake students is definitely not an isolated one, it is happening all over the region.

As we talked, I asked him how the people of the village catered for their daily needs since the nearest road was 10 km away and a small foot track full of loose stones and pebbles was the only means of communication available. He said that the villagers would climb up to their hutments carrying heavy loads on their backs. He told me that repair and reconstruction of the tracks is done on paper quite regularly. He also told me that fair price shops located at small townships never fully distribute the items; only a small quantity reaches a few influential people in the village; the balance is sold at market price to the very people for whom it was originally meant. This is the manner in which funds get waylaid by some corrupt officials in connivance with the contractors.

In the terrorist infested region of Kashmir greed became deeply ingrained in each and every organ of the society and a general sense of helplessness prevailed everywhere. Panches and sarpanches; policemen and patwaries, teachers and all other government functionaries had become defunct and corrupt to the core. It was a worst possible scenario of administrative paralysis.

Whenever there is paralysis in the body, it becomes weak day by day and gets prone to infections. Viruses and bacteria, though miniscule in size and stature, suddenly assumes centre stage to control all the organs of the body; they play havoc, until each cell and pore of the body starts crying in pain and for help. That is what the terrorists did in those sickening days, the weak body of the state was prone to infection and they became the viruses that corrupted every organ of society. Jammu and Kashmir became a fertile ground for antisocial elements to play merry hell.

Things have changed for better; there is hope and confidence in the environment. With the evil days of blatant terrorism behind the region, mainly due to the blood spilled by the security forces, the time has come for the common man to stand up and be counted to make his life and that of his family respectable and happy. Common ordinary folks like policemen, postmen, peons, conductors, contractors, doctors, teachers and so on, must resolve to be honest in their work, duties, responsibilities and not fall prey to greed, temptations, hoarding and denying others what is rightfully theirs. This way, they we would strengthen the immune system of the society and the society in turn will not fall prey to viruses and bacteria still lurking in the social environment. Once, we have paid the price with our blood we must never forget that terrorism and anti-social elements will look towards spreading the virus of corruption at some future time and there is a need to remain vigilant against any such evil machination; neither the polluted winds from across the borders should have the capacity to make the society sick. Saying no to corruption, is a very small price we would pay for the good of own children.