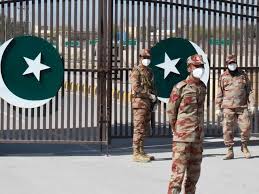 While the entire world is struggling to fight the deadly corona pandemic which has almost crippled the world economy with experts fearing the downtrend in global economy to be worse than the Global Financial Crisis of 2008and the Great Depression of 1932, the two entities in Pakistan namely its Army and the terror industry are emerging as its beneficiaries. Both enjoy patronage of China which after having infected the entire world with the deadly virus appears to be having the last laugh with China’s manufacturing rebounding in March as authorities relaxed anti-disease controls and allowed factories to reopen and supply chains to re-build, while other governments including US and India have shut businesses.

The Financial Action Task Force (FATF), the global watchdog against terror financing and money laundering is presently being presided by China. The FATF was closely monitoring the fountainhead of terror Pakistan since 2018 and forcing the later to comply with the stringent guidelines laid down by the organisation. During its last plenary held in February when it was widely anticipated that Pakistan will be shifted from the grey list to black list due to its persistent non-compliance of the global body guidelines, China came to its rescue and ensured its continuation in greylist with a stern warning to ensure hundred percent compliance before the June plenary failing which it would definitely be blacklisted. Pakistan as usual was dilly-dallying because without terror it has no global identity with the hope that its diplomatic offensive would once again come to its rescue. Controlled by Pakistan Army, Imran Khan’s government was not in any position to initiate action on the balance 13 points. It is at this stage the deadly Wuhan Virus known popularly as Covid-19 invaded the world and rescued Pakistan once again permitting it to continue with terrorism as an instrument of state policy. Out of the 27-point action plan, FATF had so far declared Pakistan fully compliant on 14 points and there was the deadline of June 2020 for complying on the remaining 13 points in a bid to ensure exit from the grey list of the watchdog. Now this deadline has further been extended up to September 2020. Pakistan was bound to submit its progress report to the joint working group (JWG) of FATF till April 15, 2020 but now Islamabad would have to make progress report for submission till July 2020.Apart from intensifying terror activities in Kashmir, which is undergoing a change, Pakistan also began to use varied jihadi terror groups in Afghanistan to attack and threaten Indian assets. The killing of innocent Sikhs inside a Gurudwara using the services of IS KP (Islamic State Khorasan Province) for the inhuman terror act is the example. Terror groups are being revived, regrouped, trained and being deployed on launch pads with active connivance and support of Pakistan Army, the other beneficiary.

Not very long ago in February this year the US welcomed the conviction of Hafiz Saeed, Mumbai terror attack mastermind and chief of banned Jamat-ud-Dawah (JuD), and described it as an “important step forward” for Pakistan in meeting its international commitments to combat terror financing and not to allow non-state actors to operate from its soil.In February, Lahore’s anti-terrorism court sentenced Saeed and his close aide Zafar Iqbal to five and a half years each and imposed a fine of Rs 15,000 in each case. A total of 11 years sentence will run concurrently. Many thought that it was due to the pressure of FATF and warning by the international terror financing watchdog to Pakistan to deliver on its commitments to curb terror financing and money laundering. But as soon as the news of extension given by FATF was received an anti-terrorism Court in Pakistan trying Hafiz Saeed in four terror financing cases adjourned indefinitely the trial against the UN designated terror master mind who enjoys five –star facilities even while in jail/detention because of being a blue-eyed favourite of Pakistan Army. Another beneficiary of the pandemic.

The other major beneficiary has been the all- powerful Pakistan Army, another favourite of China. Inept handling of the Corona crisis and Imran Khan’s inaction to take timely measures left  Pakistan’s powerful military with no option but to make its presence publicly felt. Defying Imran’s authority, Pakistan’s newly appointed DG ISPR and chief spokesperson of the Army, Maj Gen Babur Iftikhar informed the nation on March 23, Pakistan’s national day, that Army has decided to deploy troops across the country in response to calls for assistance from provincial authorities.

In a subsequent statement Gen Babur clearly exposed Army’s mind-set and the disdain it has for the civil leadership, “My first action was to announce a countrywide lockdown, when Pakistan’s Prime Minister Imran Khan was incapacitated by common sense, which as you know, isn’t that uncommon. I am Pakistan’s corona soldier. These are unprecedented times. And unprecedented times call for unprecedented measures. Why else do you think the armed forces is making hand sanitisers? It is good for business, of course, but then one has to oversee hundreds of our military’s businesses. How else you think our country is going to run?” His statement clearly indicates military’s desire to look after the various businesses being run by the Army with corona management being secondary.

Later on April 1, in an unusual move Planning Minister Asad Umar, rather than PM Imran Khan, announced that the varying restrictions on public movement introduced by the federal and provincial authorities in the second half of March would be extended until April 14 and the situation is handed over to the Army.   The military announced that Lieutenant General Hamood Khan will be in charge of its command and control apparatus and would oversee the state’s response to the pandemic. Gen Bajwa almost relegated Imran Khan to a paper tiger like a ceremonial prime minister.

Army lost no time in issuing a diktat that no corona positive patient will be housed anywhere near a military asset or the residential areas of the military families. Orders were also issued to establish quarantine camps in POJK including Gilgit-Baltistan, away from Punjab, with twin aim of spreading the deadly virus among the locals and establishing POJK as launch pad for unleashing bio-terror across the LoC in Kashmir. With the Damocles’ sword of FATF temporarily off its head, the notorious ISI of Pakistan became hyper active to renew terror threats in India. Reports also poured in of ISI’s design to push Corona infected Indians working abroad in various corona affected Muslim countries via the Nepal border with one of its henchmen Jalim Mukhia, a Nepal-based arms and fake currency smuggler.

Pakistan Army unable to handle the corona pandemic in Pakistan has resorted to is time –tested technique of diverting nation’s attention through activating the border and the LoC. There has been unprecedented increase in ceasefire violations (CFV) resulting in civilian injuries including deaths of females and minor children. On its part, Pakistan Army had ensured that air link to China is not closed while most of the international flights being banned so that its supply chain of arms and ammunition from China is not disrupted and it can continue to keep the LoC hot. For China it is a win-win situation, while it allows China to contain its main rival India through its proxy at the same time Pakistan’s ever increasing dependence on China would enable it to coerce Rawalpindi at will.

The same opinion is shared across the fence as well. Amzad Ayub Mirza, a known  political activist and writer  from Pakistan occupied Jammu & Kashmir (POJK) has alleged that Pakistan has been regularly violating ceasefire at the Line of Control these days to infiltrate terrorists into Kashmir valley amid COVID-19 spread. He says that Pakistan hasupped violence along the border to hide its incompetence at handling Coronavirus spread and wants to divert people’s attention.”It is Pakistan, which is responsible for ceasefire violation. We, the people of Po K are aware of this fact that always Pakistan initiates a ceasefire violation to which India retaliates,”said Mirza.

He has quoted three possible reasons for the continued CFV and heavy shelling on civilian areas across the LoC. The primary reason being the exposure of the establishment over the mishandling of the pandemic.  The second reason is that they want to “infiltrate jihadi terrorists” Mirza stated, adding that the ceasefire violations provide these terrorists cover fire and facilitates infiltration. “And now they (Pakistan) have decided to infiltrate those terrorists who are corona patients so that they can travel Jammu and Kashmir region and spread the virus,” he said further. The third possible reason according to Mirza is planned massive deployment of its troops in Gilgit-Baltistan to open a new front of infiltrating the jihadis in future.

Whether people die due to hunger, poor medical assistance or deadly corona pandemic, does not make any difference to the Pakistani generals whose devious mind is clouded and ever busy with using terrorism as part of its war fighting strategy. China is training Pakistan to master the art of hybrid or the grey zone warfare even amidst the spread of corona pandemic.