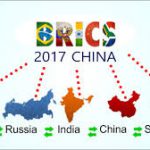 Vikas Khanna Unpredictability seems to be the mantra of China’s foreign policy! To everyone’s surprise, China joined hands with the four other BRICS nations and endorsed the Xiamen declaration that named militant groups based in Pakistan as a security concern in the region. The groups named in the declaration included Lashkar-e-Taiba (LeT), Jaish-e-Mohammad (JeM), Afghan … END_OF_DOCUMENT_TOKEN_TO_BE_REPLACED