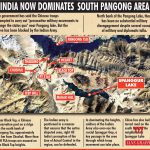 Dr. Simrit Kahlon The Chinese leadership and its chief land mafia, the People's Liberation Army  (PLA) are presently nursing a bloody nose and a terribly bruised ego. Their belligerent plans in Eastern Ladakh have been demolished by the Indian Army that has proved its tactical and operational superiority. PLA stands exposed as being nothing more than a bully, full of … END_OF_DOCUMENT_TOKEN_TO_BE_REPLACED