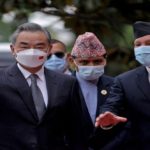 Lt Gen Shokin Chauhan Nepal’s relationship with China’s first recorded official engagement dates back to the middle of the seventh century, when Nepal’s armed forays into Tibet led to Chinese intervention favouring the latter. It resulted in the signing of the Sino-Nepalese Treaty of 1792, which provided a tribute-bearing mission from Nepal to China every five years as a … END_OF_DOCUMENT_TOKEN_TO_BE_REPLACED