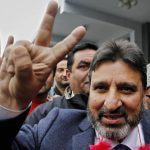 Dr. Simrit Kahlon A counter terrorist operation in Village Khawjapora Reban, District Shopian, on the morning of 9, March, led to the killing of a two terrorists associated with Hizbul Mujahedeen and identified as Shabir Ahmad Malik alias Abu Maviya, resident of Village Tungduno Yaripora, District Kulgam, who had been active since December,2017 and Amir Ahmad Dar resident … END_OF_DOCUMENT_TOKEN_TO_BE_REPLACED