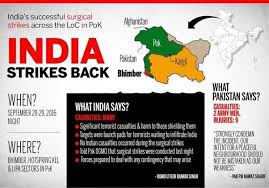 Two years back, on 18 September 2016, Pakistani terrorists carried out a cowardly attack on an Indian army establishment at Uri in the Kashmir Valley. Fidayeen (Suicide) squads of terrorists had been launched by Pakistan across Jammu and Kashmir and the attack was a part of the overall game plan. It was designed to escalate the threshold of violence in the state, in support of those charged with causing social disruption. The objective of the attack was to demonstrate to the disrupters the vulnerability of the security forces and keep the former motivated. Another important objective was to discredit the Indian Army.

A feeling of outrage swept the nation in the aftermath of the Uri attack. The incumbent Narendra Modi led Union Government well realised that the policy of appeasement followed by successive Indian Governments had not paid any dividends. The time had come for the Indian state to evolve a policy that was pragmatic and in tune with the existing realities.

The government did not have the luxury of being swept away by emotions like the general public and the media. It had to move deliberately, keeping the long term implications in mind. Being privy to many options, the government worked out its response in a clinically logical manner.

The contours of the Governments strategy became visible from the statement made by Prime Minister Narendra Modi during the Bharatiya Janata Party (BJP) National Council meeting in Kozhikode, Kerala, and address of External Affairs Minister, Sushma Swaraj, at the United Nations General Assembly (UNGA) meet at Geneva.  Both leaders, while speaking in sync with each other, denounced Pakistan as the sole exporter of terror across the globe and castigated the Government of Pakistan for gross human rights violations in Baluchistan, Gilgit-Baltistan, Khyber Pakhtunkhwa and other areas. The Prime Minister also assured the Nation that the perpetrators of the attack will not go unpunished.

Pakistan was provided with concrete evidence of the attack having originated from its soil by terrorists trained and infiltrated by the Pakistan Army into the Kashmir Valley for this specific purpose. The evidence was also shared across the world leading to a virtual isolation of Pakistan.

The prong of the government’s strategy aimed at isolating Pakistan in the global community reaped excellent results. The then Prime Minister of Pakistan, Nawaz Sharif, during his UNGA address, felt the heat of India’s newly crafted policy.  There was a negligible audience present to listen to his address, which demonstrated the global disgust at his country’s actions. His address was later torn into shreds by a young diplomat from India, Eenam Gambhir; her riposte has now become a legend of sorts.

So far as the military response was concerned, the government left it to the Army to extract retribution in any manner that it deemed fit. The Indian Army responded within ten days, on the night of 28-29 September 2016. In a well conceived and audacious operation its brave soldiers destroyed more than seven terrorist camps in the Pakistani side of the Line of Control (LOC). The attack that was carried out simultaneously at four different locations of Bhimber, Hotspring, Kel and Lipa and it resulted in the death of 38 terrorists and two Pakistani soldiers. No casualties were suffered by the Indian raiding parties.

The next day, the then Director General of Military Operations (DGMO) of the Indian Army, Lt. Gen. Ranbir Singh made a public announcement of the surgical strike having been carried out. He did so after informing his Pakistani counterpart of the same. A visibly embarrassed Pakistan did to accept that any such operation had taken place; the Pakistan posture, however, was soon exposed as a blatant lie.

The Uri episode demonstrated the incompetence and inability of the Pakistan army to face its adversaries head-on. By resorting to such unholy means to further its objective, the Pakistan Army shamed not only itself but the entire soldiering community of the world.

The Indian “Surgical Strike” was, on the other hand, unique in its righteousness, planning and conduct. Unlike Pakistan that sent in terrorists to create violence in Jammu and Kashmir, the Indian Army, in keeping with the highest tenets of soldiering, sent in its soldiers to destroy the enemy. Unlike Pakistan the Indian army was quick to acknowledge that it had carried out the operation for the sake of national security.

Such is the perfidy of Pakistan that within days of the Uri attack it had already started mustering terrorists along the LOC for infiltration into Jammu and Kashmir. It did so since it was sure that India would not respond. The surgical strike put paid to all misnomers that the Pakistani Army held about the ability of the Indian Army to secure the interests of the Indian Nation by military means.

The surgical strike did cause a setback to infiltration of terrorists into India by Pakistan but it was back to its evil ways soon enough. It is consistently attempting to push in as many terrorists as possible through infiltration and also attempting to augment its terrorist strength through recruitment of misguided Kashmiri youth.

The Northern Command of the Indian Army, along with the state Police and paramilitary forces, as also with the full support of the local people, is very successfully thwarting the evil designs of Pakistan. It is eliminating more terrorists than what the neighbouring country can put on ground. The Northern Command, incidentally, is now being commanded by Lt. Gen. Ranbir Singh who, as DGMO, master minded the surgical strike. He is fast emerging as the biggest thorn in Pakistan’s evil designs

India will need to remain ever vigilant and ready to give a befitting response to Pakistan’s attempts to forcibly occupy Jammu and Kashmir through violence and terrorism. With the surgical strike our soldiers aptly demonstrated their capability to meet any perfidious challenge that Pakistan would throw at them. The nation needs to stand steadfast with its brave soldiers in their tryst to destroy evil intentions of the enemy.

(Col. Jasbir Sarai is an Army veteran and a senior functionary of Aam Aadmi Party)