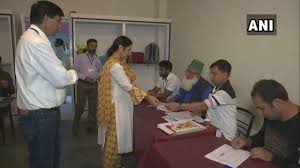 The successful culmination of the Urban Local Bodies Election in Jammu and Kashmir has created a new and dynamic socio-political narrative in the trouble torn state. At the outset, it has exhibited the resolve of Governor Satya Pal Malik to pursue the political agenda vigorously and fearlessly. His efforts, in which he was ably assisted by his team, the security forces and the Union Government, are deserving of the highest approbation and commendation.

Also to be commended are those who stood for the election, especially so in the Kashmir Valley. They opted for the democratic process despite threats and intimidation from the terrorists and other anti-national forces functioning in the state at the behest of evil foreign forces.

The people who came out to vote, however small their number may be in certain parts of the state, have clearly exhibited their faith in the Indian Constitution and the values of democracy and freedom that it represents. It is hoped that others will take a leaf out of the courage shown by them and will emulate the same in times to come. Such an opportunity will come their way soon enough when the Panchayat elections get underway in the state.

The election process has also laid bare the weakness of the terrorist cadre which was unable to derail the process through perpetration of violence. The failure was definitely not due to lack of will on the part of the terrorists and their masters! It was due to an inability to stand up to the might of the security forces, especially so – the Indian Army; relentless and sustained counter-terrorist operations by the Army, even while the election was in progress, denied to the terrorists the opportunity to strike and left them and their masters impotent and shamed. The situation may well herald the end of terrorism in the state.

Politically, there is a message of change as well as hope that these elections have brought in their wake. The BJP has barely managed to retain its majority status in the Jammu region which gives it ample reason to be worried about its dwindling support; the party, however, has a reason for cheer for having opened a good account in the Kashmir Valley, which is a big achievement. The Congress too has every reason to feel optimistic on having done reasonably well in both the Jammu and the Kashmir region and having swept Ladakh; the party is now poised to pose a viable challenge in the next assembly elections which would be good for the democratic credentials of the state.

The successful conduct of the elections would have come as a shock to the local parties like the National Conference (NC) and the Peoples Democratic Party (PDP) who had boycotted the same. They were quite certain that due to their boycott the entire exercise would fall flat on its face. On ground the absolute reverse happened. Their self view of being the power centres of the political narrative in Jammu and Kashmir has received a great jolt and they now stare at political isolation and irrelevance.

The success achieved by many independents across the state is definitely something to be very happy about. Undoubtedly, many of these independent candidates would be proxies of various political parties, but even so, they herald the advent of a new leadership that the state is very much in need of. They are the leaders coming in with a fresh mind and new thoughts who have the potential of breaking the debilitating political status quo that the region is plagued with. It is towards nurturing of this new talent that the efforts of the government should be directed.

The elections have ushered a governance opportunity in the region, which is definitely a positive development. Now governance will function from the grassroots, something that has been denied to the people for long due to vested interests. The perception that the election are a farce is being created by a select few whose interest lies in keeping Kashmir on the boil and also by those who do not wish to see political power permeating to the grass roots. It is a dangerous propaganda designed to create insecurity and panic among the people and it should be countered most vigorously.

What has emerged as a ground reality is that Kashmiris simply wish to be left alone to pursue their lives in a free democratic environment with basic amenities being provided to them. The election will lead to the establishment of Municipal Councils which will provide just that to the people.

In the long run, the performance of the Local Bodies will be the deciding factor to gauge the success of the initiative. If the elected representatives perform their duty with utmost honesty and diligence, to the benefit of those who have elected them, the environment in the state will witness a paradigm shift for the better. The people, on their part, will have to strengthen their leadership by supporting it and by paying their taxes so that development work can be taken up expeditiously and with respect. The focus has to be on good governance, not on garnering doles from the Union Government as has been the norm. The Union government will, of course, give what is due to the state and more, but it is the people who have to take their lives in their own hands.

Kashmir has seen hard times and it deserves to grow out of them. The successful conduct of the Urban Local Bodies elections has set the stage; having achieved so much it is now up to the people and their elected representatives to bring about the desired change. In this endeavour they have the good wishes and support of the entire nation.

(Dr. Simrit Kahlon is an academician and a reputed columnist)