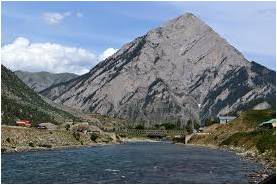 Jammu and Kashmir has been known for its secularism and religious tolerance since times immemorial. The Kashmir valley thrives on the unique social ideology of Kashmiriyat, which advocates a cultural identity based on human values, diversity and tolerance, it is a historic legacy shared only by the Hindus and Muslims of the valley. The area South of the Pir Panjal has, for centuries, witnessed seamless coexistence of many religious entities including Hindus, Muslims and Sikhs who may pray to different Gods but share a common language, social customs, folklore and dress code. The rulers of the state of Jammu and Kashmir were never known to discriminate on the basis of religion; there were no religion based taxes as in the case of the Mughals and nor was there any restriction on religious practices. The political opposition that the Dogra rulers faced a little before independence was not based on religious lines, it had more to do with gaining democratic rights for the people. The ethnic cleansing that took place in the Kashmir Valley in the 1980’s was the handiwork of foreign terrorists and it continues to cause distress to most Kashmir Muslims even as they eagerly await the return of their Pundit brethren. All through the period of insurgency, religious polarisation was caused by the foreign element and not by the local populace.

Terrorism has been contained in the region by sustained efforts of the security forces including the Indian Army, the Para-military forces and the JK Police with active support of the common people. With the decline of terrorism the ability of the disruptive forces to cause a divide on religious grounds has also diminished. A normal situation has come about not only in day to day routine but also in the relationship between various communities and religious sects. All this spells disaster for those who wish to subvert peace for which new methods are being adopted to engineer communal divides.

A few months back in October, 2012, protests rocked the Chenab valley over alleged blasphemous content uploaded on some social networking websites. Major townships of the area including Kishtwar, Doda and Bhaderwah remained shutdown in a tense situation. The matter took an ugly turn by the arrest of some members of the Hindu community charged for allegedly uploading the content; wild rumours did the rounds creating a very critical situation. Sensitive handling by the Police and other security forces dispelled what could have escalated into a major communal rift.

Also in the month of October, 2012, the otherwise calm and peaceful Zanskar in the Ladakh region suddenly erupted into a communal frenzy on the alleged killing of some persons of the minority Muslim community by the majority Buddhists because of conversion of some Buddhists to Islam. The protests and attendant violence led to the imposition of curfew and it was quite some time before the situation turned normal.

Instead of trying to assuage charged up emotions as a good leader should, the separatists went into proactive mode to derive as much political mileage out of the turmoil as possible. Syed Ali Shah Geelani openly incited the already high voltage sentiments by alleging that the episodes were a deep rooted conspiracy against the Muslims and the government was not taking any steps to catch the miscreants or bring about order. Not one to miss any opportunity to give a boost to his line of politics, Geelani said with great relish, “It (the government) is also trying to divert the attention of masses from the freedom struggle by whipping up sectarian clashes.”

Yet another issue that was picked up to incite communal violence was the proposal to build a road to the Holy shrine of Amarnath in order to facilitate easy movement of the lakhs of pilgrims who come for the pilgrimage over a short period of time. The Hurriyat led by Geelani made every effort to whip up passions even before the construction process could take off. The project was said to be against forest laws and a cultural invasion of the Muslims of Kashmir by the Shri Amarnath Shrine Board. The government reacted by flying a group of journalists over the Baltal-Panjtarni-Holy route and they reported no traces of road building or dumping of construction material. An offer for a similar helicopter ride made to Syed Geelani was haughtily refused by him as an effort to “divert attention from the real issue.”

A spate of incidents designed to incite communal violence happening in diverse areas of the state within a small period of time just before the onset of winters is too much of a coincidence. Having failed to break the social fabric of the state through the might of the gun, the foreign inimical forces in concert with the indigenous supporters seem to have launched a well thought out and efficiently stage managed campaign to engineer a divide by exploiting religious sensitivities. The fire is proposed to be spread through modern communication means. In fact, the first incident was triggered by use of the internet as in the case of the “Arab Spring.”

Peace is returning to Jammu and Kashmir after a lot of sacrifices and hard work; the improved situation is a manifestation of the aspirations of the people for democracy, freedom and humanity as against dogmatism and sectarianism. The challenge, however, is far from over; new and innovative methods are being explored by vested inimical interests to dominate the society after breaking its intrinsic fabric. The people and the government need to stay alive and alert to such vicious attempts and to counter them with all the force at their disposal. The recent attempt to engineer a sectarian divide has not succeeded because the people rejected the same, this does not mean that attempts will not be made in the future.