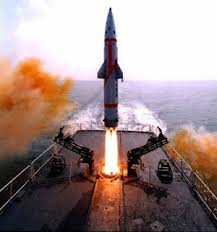 The Indian Army successfully test-fired Prithvi II, a medium range surface-to-surface ballistic missile from a defence base in Balasore district on Thursday, October, 04. The launch was described as part of a limited stock production test by the Indian army as the user being provided with logistic support from the DRDO. A missile was picked up randomly from the assembly lines and test fired successfully from a mobile platform based on the controversial Tatra vehicle. Prithvi II is 8.56 metre high and one meter thick with a launch weight of 4.6 tonne and a strike range of up to 350 km. It is powered by a liquid propellant and can operate with both liquid as well as solid fuel.

The very next day, Friday, 05 October, a user trial of a surface-to-surface ballistic missile, Dhanush, was carried out by the Indian Navy from a warship off the Odisha coast as part of a training exercise. Dhanush is a naval version of the Prithvi missile. The test firing was also successful. “All the mission objectives were met in a flawless performance. All the radars, telemetry stations and electro-optical systems tracked and evaluated the performance of the missile in real time,” said a defence official. A few weeks earlier yet another successful launch of the 3000 km range nuclear capable Agni-III missile from the Wheeler Island was carried out.

There has been a perceptible increase in the test firing of nuclear capable missiles in the recent past. This is an indication of the Strategic Force Command (SFC) of the Indian defence forces coming of age. The command has been raised as a tri-service organization with the mandate of controlling the missile capability of the nation. The large number of validation tests being conducted indicates that the SFC has its operating procedures and systems in place and is now fully operational. This is a welcome development given the missile threat being faced by India I from its immediate neighbourhood.