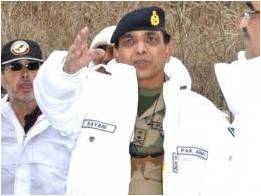 Can a leopard change its spots? It seems so, if we take note of Pakistani Army Chief, General Ashfaq Parvez Kayani’s posture post the unfortunate avalanche in the Gyari sector of Siachen in which 138 soldiers, mostly of the ill fated Northern Light Infantry, have recently lost their lives. It needs to be reiterated that the Northern Light Infantry is the same body of troops hailing from the Pakistan Occupied Kashmir territories who were used as cannon fodder in the Kargil misadventure. Kayani who had travelled to Gyari with President Asif Ali Zardari, stated that withdrawal of troops from Siachen is necessary to improve ‘atmosphere’. However, Kayani did not change many of his spots while looking for a change in status quo. He also contended that Pakistan had stationed its troops in Siachen in response to a move by India. “The world knows why we are in Siachen,” he said grandly.

One can fervently hope that Kiyani means what he is saying even as logic dictates that this is merely a statement meant to ward off negative media coverage to an avoidable accident in which many soldiers have died. In case he is serious then only one action has to be taken to resolve the issue in perpetuity. The actual position on ground of the Indian and Pakistani forces in the glacier has to be authenticated and marked on a map. This is now a big issue since the positions of both Nations have not changed for many years now;, what is important is to break a mindset and come forward for a solution. Now let us see if Kayani is ready to walk the talk.