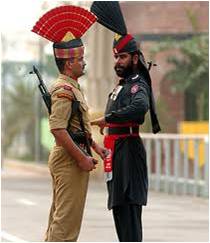 Amidst reports of worsening of relations between the traditional foes, India and Pakistan, post the 26/11 Mumbai attacks, there was one refreshing aspect, the formal established channel of contact between the two armies – the hotline between the Director Generals of Military Operations, which was activated after the Batalik incident of 1999, continued, and was, in fact, the only regular channel of communication open to both countries until official contacts resumed.

Since independence, there have been numerous efforts from both sides to mend fences through Track II Diplomacy. Some like the Shimla Accord of 1972 have succeeded, others like the Agra meeting have reached nearly there, yet, there has been no committed attempt to open out channels of defence diplomacy.

Recently a story in “The Times”, a US based international magazine, has hinted towards a back channel contact between the Indian Prime Ministers Office and the Pakistan Army Chief, Ashfaq Kiyani. Officially, this initiative has been denied by both sides. Quite aside the fact that the denials would have come as a dampener for those who believe that there is a dire need for putting in place a dialogue between the two establishments, the “unofficial” nature of the contact has raised serious doubts about its efficacy. On the other hand, it is being widely accepted that this strategy, if implemented, may just work where all others have failed. It is also widely accepted that if indeed there is a back channel at work, then it is best kept under wraps, not so much because it would make public what was being discussed or even negotiated, but more because it would be premature to admit its existence until it becomes a regular feature. In support of the argument, it can also be pointed out that even in the midst of the Kargil War, military personnel were in contact with each other through flag meetings and “hot lines”.

There is still a strong case for some sort of contact on the military level. It can be as simple as an exchange between our National Defence College and Pakistani National Defence University and exploration of this track to see if a more sustained engagement is possible with the real (military) rulers of Pakistan, as opposed to the civilian show-boys that our Foreign Ministry mandarins are quite comfortable in dealing with. The aversion amongst India’s bureaucracy in dealing directly with Pakistan’s military is understandable but is not in sync with ground realities, given the power dynamics of Pakistani politics.

Pakistan is, in a sense, a schizophrenic society. At one level, there is deep distrust and suspicion of the military establishment. At another level, there is an innate, almost blind, trust and faith in the ability and capacity of the military establishment to protect the country and put things right. Most Pakistanis are quick to follow the lead of the army on issues of national security, especially when it comes to relations with India. As a result, when the army allows it, people gladly reach out to India and when the army shuns it, the very same people pull back on all contacts.

Much of the logic for this line of thought also flows out of the continuing military to military contacts with China in spite of all the hiccups on the Arunachal boundary and `no visas to J&K residents’ issues. Clearly, Beijing’s intent was to highlight the disputed nature of the territories controlled by India, Pakistan and China. Their methods definitely did not contribute to the letter and spirit of good neighbourliness, yet, the two nations have managed to put acrimony behind them and an Indian General holding command in Jammu and Kashmir has since visited China.

The bottom line is that while India can have as many ‘uninterrupted and uninterruptible’ dialogues with the civilians in Pakistan as it wants, unless it manages at least a Modus Vivendi with the all-powerful Pakistan Army, none of these dialogues will lead to anything substantial. Without getting the Pakistan army on board, any dialogue will either be one for the deaf or one with the meek and powerless, who, one daresay, are unlikely to inherit Pakistan. Quiet, serious and sustained military diplomacy is the only way forward. Moreover, if this ‘composite’ back-channel shows promise, and creates an opening for discussing the strategic dimensions of the bilateral relationship, the two sides could consider bringing it on the front channel. In other words, they could make the transition to a ‘strategic dialogue’ in which a working group comprising of designated civilian and military officials would discuss matters of higher state policy and the future trajectory of bilateral relations.

There are essentially two ways that India can do this, first is to engage Pakistani politicians and civil society, promote people-to-people exchanges and trade in the hope of creating a constituency of peace that will force the hand of the military establishment to normalise relations with India. But quite frankly, for this strategy to work, India will have to wait till the cows come home. The second option is to continue with the above strategy, but simultaneously open another channel of communication and engagement; an ‘official and empowered’ back channel engagement of the military. Needless to say, given the contrasting power structure realities of both the establishments, this back channel contact will have to be handled with utmost care. In a democratic country like ours, a back channel naturally tends to evoke suspicion.

It is indeed creditable for both sides that the ceasefire along the entire J&K border has been holding since November 2003 despite provocations and indicators to the contrary. In view of this outstanding success and resumption of the composite dialogue, it would be quite logical to include in the process a military to military level contact as an important segment of the overall process.