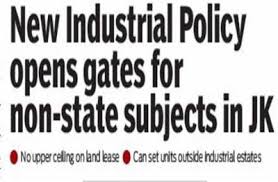 Such is the misfortune of Kashmir that the moment something that is good for the people is even suggested it becomes a catalyst for all warring separatist segments to join hands to ensure that it is not implemented. Such a misfortune is once again striking the people there.

Separatists are, in one voice, out to scuttle the New Industrial Policy that the government wishes to adopt to boost the sagging economy of the state, especially the Kashmir Valley.

The New Industrial Policy will allow non-state subjects to get land on lease for setting up industries outside the industrial estates in the state. This is, as expected, being construed by the separatists as an attempt to “change the demographic profile of the state” and has galvanised their otherwise dilapidated camp into frenzied action.

The spearhead of the “movement” is Jammu Kashmir Liberation Front leader, Yasin Malik. He is busy visiting other separatist leaders in a so-called bid to forge unity against the “conspiratorial programmes” of the government. “It is a do or die situation for Kashmir,” says Malik grandly.

A forward looking industrial policy, in keeping with the times and designed to attract investment is actually a “do or die requirement for Kashmir.” In case it does not come by soon, the entire state (and Kashmir in particular) will be left too far behind in the country’s march towards transformation, thus inflicting a terrible loss to the people

The contention that investment is a decoy to “change the demographic profile of the Valley” is laughable. Who in his right mind would like to migrate to an under developed, regressive state like J&K particularly the Kashmir Valley? There are hordes of young people from J&K (including Kashmiris) who are moving out of the state in search of a career since there is no opportunity available to them. Nobody, however, is showing any inclination to come in to the state. Even students from outside the state studying in Srinagar in central institutions are desperately petitioning for transfers, what to talk of professionals coming to the valley to work.

There are thousands of people of Indian origin on work Visas in the US, Europe and the rest of the world. They are definitely not out to change the demographic profile of their country where they are working. Why then would a professional wish to do any such thing in Kashmir?  This warped argument is nothing but a fallacy being perpetrated by the separatists and others working on the behest of Pakistan.

Even after application of a forward looking Industrial policy it cannot be said with any certainty that the industry will respond positively. And here are the separatists trying their best to ensure that the effort does not even take off! Can there be a more sad state of affairs than this?

Any right thinking person would understand that the separatist want to keep the people of Kashmir backward and poor so as to control and manipulate them to their advantage. If the youth of Kashmir get better opportunities for employment and prospects of building a career, would they be ready to pelt stones and risk their lives for the separatists for a mere Rs 500?

The separatists are adept at building a doomsday scenario and keep the people in a constant state of paranoia. It is the people who should realise that the world is fast becoming a global village while they are being forced into grand isolation. The people should realise that the separatists work at the behest and directions of Pakistan and the country is no friend of the Kashmiri’s. If it had been than Pakistan Occupied Kashmir and Gilgit-Baltistan would not have been wallowing under so much of repression and colonisation.

The Kashmiri people should ignore the separatists and put in all effort to come at par with the rest of the country so far as economic activity is concerned. Kashmir has got great potential due to its climate, natural resources and tourism attraction, the idea is to exploit the same to its potential. This is not feasible till such time that multi-national corporations and other business houses do not invest in the state.

Already a lot of time has been lost. With more than six lakh youth without jobs the state is leading the national scale of unemployment. This situation cannot change by only creating government jobs or getting aid from the government at the centre. It can change with an enhancement in business opportunities. The sooner this simple point is understood the better.

It is not understood as to why the PDP, as a ruling party, is prone to give explanation to separatists about its actions. Musaffar Beg of the PDP, while referring to the industrial policy, said that endeavour of the government was to take all stake holders along and the government was willing to “re-look at the new Industrial policy.” Why relook at a declared policy only because a handful of known anti-national elements are against it? And since when have the separatists become stakeholder in anything that is good for Kashmir?

By making such statements the government comes across as not confident of its intentions of working towards the benefit of the people. It is such utterances that give to the separatist the motivation of carrying forward their nefarious agenda. If they are left to their lot and no attention is paid to their haranguing, they would automatically lose steam.

The bottom line is that the industrial policy, in the manner that it has been conceived, is a step in the right direction to assist the youth of the Kashmir valley in becoming gainfully employed within their state and region. A few vested interests should not be allowed to derail the same.  If the economy of the state looks up security, disenchantment etc will automatically take a backseat and Kashmir will become the “heaven on earth” that it is feted to be.