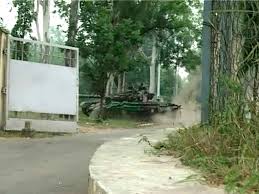 Forty-eight hours after the terrorist strike at Kathua and Samba in Jammu region the actual details of the incident continue to remain hazy. The sequence of events at Kathua and the manner in which the terrorists reached Samba is well known. The entry of the terrorists into the Army unit, 16 Cavalry, has also been pieced together by narrations of civilians who were present outside. What is not known is the manner in which operations unfolded within the unit.

Even as the Army remains tight lipped about the operation, unconfirmed reports suggest that presence of mind and spontaneous action by some of the soldiers of the unit saved a major carnage by the well trained terrorists. The information that has come out through word of mouth within Army circles speaks of the bravery of an officer of the unit who quickly loaded ammunition in a tank and reached the area behind the officer’s mess where the terrorists were located and from a range as close as 10 to 15 yards shot two of them. Very naturally, the third terrorist panicked and holed himself up. At that stage other officers and men of the unit cordoned off the area and blocked his escape routes, he was also shot subsequently.

Attacks by well trained Fidayeen of the calibre that came in have been known to cause massive damage and casualties. The manner in which events have unfolded in this operation clearly indicates the high level of planning and professionalism that marked the strike. The timing of the attack was such when any organisation is busy with its morning administration. In this case the unit had just returned from its morning physical training drill. Under the circumstances and the fact that there were families in the quarters behind the officers mess, towards which the terrorists were headed, points to the possibility of a major carnage had not prompt, brave action saved the situation. It can be derived from the entire proceedings that the terrorists, after the initial burst in the officers mess did not get an opportunity to target anybody else. This when the top level of leadership in the unit was already injured/killed; the brave and spontaneous action taken by the young officers and soldiers was without any central direction whatsoever.

That the action of the unit is to be inquired into through a Court of Inquiry is being written about in a manner suggesting that the unit is under a cloud. In the Army, Courts of Inquiry are held even for minor road accidents. There is no sense of indictment in institution of an inquiry. A major incident has occurred; definitely it will be inquired into to identify loopholes that need to be plugged.

There are other reports suggesting that the unit that had faced a minor disciplinary problem a year back is still in a state of low morale that led to lowering of guard. Whether the security set up was lower, equal or more that the established standard operating procedure is something that will be known only after the inquiry. At this stage, it can be said no unit of the Indian army stays in a state of low morale for years together. Such matters are normally hyped by those in the media who do not understand the manner in which the Army functions. Every unit has some disgruntled elements but this does to translate into the entire body of soldiers getting up day after day in advanced state of depression that impinges on their functioning. This insinuation needs to be disregarded. In any case the speed with which the unit reacted to the strike puts paid to all such misconceived theories.

There may be some sense of disquiet about the terrorist attack but this should not come in the way of acknowledging the bravery of those who have saved the situation. In earlier instances the courage of soldiers in the face of adversity has been narrated to the Nation before the insinuations. Sadly, the same is not happening in this case.

The tragedy of the present day media engagement of the Ministry of Defence is that Top Secret documents come out in the public domain with impunity but details bravery of soldiers in operations are kept hidden in a manner that leads to avoidable rumour mongering. It is hoped that the facts of the operation will be provided in order to put an end to the speculation.