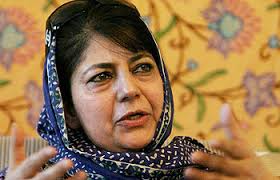 The President of the People’s Democratic Party (PDP), Mehbooba Mufti, during a recent interview with a Hindi news channel, lucidly explained the manner in which the media, especially the electronic segment; is playing into the hands of separatist and divisive forces in Jammu and Kashmir by sensationalising non-issues in their favour. When asked about the release of Masarat Alam and other such separatist related issues, she questioned the wisdom of dwelling on this marginalised minority while sidelining the real issues that affect the people of the state. She very rightly placed the people who came out in large numbers to vote for peace and democracy above the separatists who give nothing but negativity to the region. She listed out flood relief, development, tourist inflows, security and such like issues as more important for articulation than stray incidents of violence and separatism.

Sadly, her conviction will most likely be seen as a one sided and biased overview of the situation because her party is in government. If the same had been said by the president of one or the other NGO it would have been taken as the gospel truth. NGO’s in Kashmir hold a wholly anti-India and anti-state agenda because this is where the money comes from.

The reality is that there is a lot of logic and truth in the statement that Mehbooba Mufti has made. One step forward and two steps back – this is what explains, explicitly, the misfortune of the state of Jammu and Kashmir. Barely had the people heaved a sigh of relief over the formation of the government that questions regarding its credibility started being raised. There are no two views about the fact that media jingoism that led to this unpalatable situation. Media has played itself straight into the hands of the separatist and divisive elements in the state at the cost of the people who are looking for succor not disruption.

A series of terrorist attacks are carried out over a single day leading to the unfortunate death of some security personnel and civilians; one separatist is released from jail in deference to the law of the land; an anti-national rally is held by divisive forces. Suddenly we have the electronic media at its sensational best giving wind to an impression that the terrifying days of 1990 are poised for a revisit to the land.

Those who used this revisit theory with aplomb and confidence do not have even a vague idea of what the 1990’s were all about. Those were the days when terrorists roamed around in thousands; those were the days when scores of counter terrorist operations were held in a single day across the state on both sides of the Pir Panjal range, leading to severe losses to both the terrorists and the security forces. The security forces were grappling to ensure that Kashmir does not fall irrevocably into the hands of the foreign elements. Separatist and divisive forces dictated the political narrative in the state.

How can ten odd anti-national terrorists launching a few weak strikes possibly compare with the situation in the 1990’s? How can one marginalized separatist leader with a following of a few thousand compare with the mandate of lakhs that the democratic forces in the state have received through free and fair elections?  The comparison is absurd to say the least, yet, the Indian media felt no compunction in making the same!

The sad part is that it has been taken seriously by many who have cancelled plans to visit the Kashmir valley this summer thus casting a pall of gloom among the tourist operators and people of the region. It has also been taken seriously enough by the international Kashmir watchers to express concern over the “worsening situation.”

While this drama is being played out the perpetrators are sitting back and enjoying the fun. It is notable that the divisive elements have lost their ammunition already and no further escalation of disruptive activities and terrorist initiated violence has been reported. It is time for the Indian media and the Indian authorities to realize that the information challenge is being posed in Jammu and Kashmir by highly professional and experienced forces with great financial resources at their disposal. They are masters at creating situations and exploiting them to the hilt. It is because of their efforts that the world is unwilling to accept the change that has come by in the state, especially so in the Kashmir valley.

A conscious effort needs to be made to strengthen a national perception of Kashmir being an unstinting votary to the democratic norms of the Indian nation.  It is time to create a firm and irrevocable understanding that that the terrorists are foreign sponsored criminals with no support from a vast majority of the people of the state who have voted in large numbers for democracy, peace and prosperity.

The Indian media can play a leadership role in bringing about such a perception. For this the media has to be convinced and this is possible only if more and more journalists from across the country get to visit the state and interact with a wider section of the people. Most of those who write voraciously about the situation in the state have not even taken a cursory visit there. One cannot deny the need to disseminate news but in the Indian context of less news and more discussion the tone and tenor of the dissemination can be subject to some maturity.  The least that can be done is to give a fair chance to both the government and the divisive forces. The existing tilt towards the separatist and disruptive forces simply because of the higher TRP that they enjoy and the extra buck that they can spend for publicity is not a very nationalist approach.