Kashmir is a beautiful region, rich in natural resources and inheritor of an enlightened civilisation based on a unique cultural diversity that readily accepts an amalgamation of ideas and thoughts. As in the case of other such age old and  progressive civilisations across the world, it caught the covetous eyes of an evil power (Pakistan) that wishes to wrest control of the infinite assets of the region by force.

By leveraging the Muslim character of the region, the Pakistani deep state sought to gobble it up. When use of force in the form of the Indo-Pakistan Wars of 1947-48 and 1965 was unsuccessful, the evil deep state (Pakistan Army) hit upon the idea of “death by a thousand cuts” and proxy war.

The first prong of this policy was to break the inter-faith harmony of the region which translated into a concerted attempt to break “Kashmiriyat.”  Kashmiriyat is an exceptional concept of Islam practiced only in Kashmir, it has a Sufi mooring and belief in the age old Shivaite influence, it ensured that different faiths merged seamlessly into a homogenous community with common language, common dress code, common eating habits and a shared culture.

Kashmir valley is called the land of Sufis and saints because of the high number of mystics who have graced the region. Kashmiriyat is an offshoot of visionary thinking of these saints who are revered across the land by Kashmiri’s of all religions and faiths, be it Kashmir Muslims (Both Shia and Sunni) Kashmiri Pandits and Kashmir Sikhs among others.  In Kashmir, people may pray to different Gods but they believe in the Sufis and saints collectively.

Prominent among the saints was Lal Ded. She combined Islamic and Shivaite thoughts to create a bridge between all communities. The vision of Lal Ded was carried forward by a great Sufi mystic, Sheikh Noor-ud-Din, also called Nand Rishi, whose shrine in Charar-e-Sharif is the most revered place of pilgrimage for the entire Kashmiri community.

Pakistan, with the support of powerful Islamist forces first engineered the exodus of the Kashmir Pandit community and then attempted to replace, through terrorist violence and coercion, Kashmiriyat and Sufi culture with the more radical Saudi Arabia propagated Wahabi-Salafi concept of Islam.

It is to the credit of the very courageous people of Jammu and Kashmir, especially the Muslim community, that they withstood the violent, terrorism infested onslaught and emerged victorious. In  meeting the challenge of violence and terrorism, the people got the complete support of the security forces led by the Indian Army and comprising the JK Police and central paramilitary forces. The role of the Army has remained, by far, the most significant. 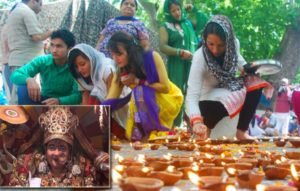 Today we have a situation where foreign sponsored terrorism has been contained  to a level where normal activity has become possible in the region. Disruptive and divisive activities like stone pelting, calls for Hartals (strikes) and Bandhs (lock outs) that were engineered by certain elements of the civil society for vested financial interests have also been contained.

The Union Government and the State government have put in place an ambitious plan to revive the economy. Education, which has always been the mainstay of the people of Jammu and Kashmir, is gaining international standards with the best institutions coming up across the Union Territory. Similarly, other core sectors like infrastructure, health, tourism and employability of the youth are gaining momentum.

It was quite evident that even after decades of indoctrination through the use of force, foreign sponsored terrorists, their ideologues and masters have failed to break the bond that has existed between the religious communities in Kashmir. In the recent past, whenever Kashmir Pandits have gone back to the valley to celebrate religious functions like Kheer Bhiwani, they have been accorded a hearty welcome by their Muslim friends.

Even more poignant has been the reaction of the younger generation; school going Muslim boys and girls have been seen making special efforts to look after the visiting Kashmir Pandits. Their actions proved that their parents and elders had spoken to them about the Pandits who are so close to their hearts and the children have developed affection for the uprooted community.

It is quite evident from the foregoing that the concept of Kashmiriyat can play a big role in reviving peace.  It can help in healing the deep wounds of the troubled past and also usher Kashmir on to the path of resurrecting  its age-old civilisation. In this, the Indian Army can play a big role given that the concept of Kashmiriyat is so intrinsic to its own secular, apolitical philosophy and way of life. Since the people of Kashmir listen to the Army, its call for all-faith amity duly supported by its own credentials will surely witness great acceptance. A thrust in this direction can pay good social dividends.

The people of Kashmir have to together find a way for peace and stability. The political leadership in Jammu and Kashmir also needs to be sensitive to the aspirations of the people and the problems that they are facing. Senior leaders from the politically active Abdullah and Mufti families have to lead the charge in changing the narrative. It is hoped that a collective effort based on the concept of Kashmiriyat will break down the culture of the gun and bring about a new era in Jammu and Kashmir that is marked with peace and prosperity.

Democracy in India gives its people the right to follow their religious beliefs; the problem arises when these beliefs are misused by some to raise passions and bring about a divide in the social fabric of the society. Such attempts need to be challenged with all possible means, especially so, in a sensitive region like Kashmir. A conscious effort has to be made to change the negative perceptions that some segments of the Kashmiri society harbours due to relentless propaganda by forces of evil. The leaders and elders of the region need to take initiative in this direction.