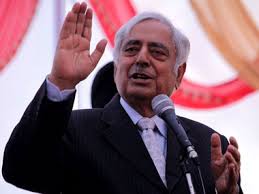 In Kashmir, the more things are expected to change the more they remain the same. Chief Minister Mufti Mohammad Sayeed came into office with a firm resolve and considerable energy to change the political status quo that has marred peace and progress in the valley. Little did he realise that those whom he was trying to court are waiting only for such opportunities to register their importance. They look upon such initiatives as oxygen for their otherwise dying agenda.

As predicted, the response of the separatists and the terrorists to the overtures of Mufti was one of disdain. Instead of appreciating the gesture and taking a step forward, however feeble and wary, they scaled up their anti-national activities. There was a spate of terror attacks across the state supplemented with some unsavoury disruptive activities by the separatists in the valley; the most disgusting among these was the waving of Pakistan flags in separatist rallies.

It is to the credit of the chief minister that he realised his folly soon enough and renounced the separatists for exceeding limits. Mirwaiz Umar Farooq has been placed under house arrest ahead of the Hafta-e-Sahadat (martyrs week) being organized by the Hurriyat Conference from May 16 to May 21.  Undeterred by the many insinuations of “state aggression” made by the Hurriyat constituents, the government has gone ahead with imposing restriction in old Srinagar to thwart the Eidgah rally of Hurriyat Conference (Mirwaiz)

Another notable aspect of the proceedings is the manner in which J&K Director General of Police, K Rajendra Kumar, has laid out the security reaction to the rally. He held a meeting of officers of the Police, CRPF, Intelligence agencies and others ahead of the rally and met with the press thereafter. During his media interaction he laid out the broad parameters of his plan and emphasised the need for people’s cooperation in maintaining peace.

“Coordination among different agencies will lead the efforts towards a right direction for ensuring a lasting peace in the state. All stakeholders have to follow a people-friendly approach while dealing situations and exhibit tolerance, avoiding excess use of force,” said the DGP.

By holding the meeting and making it public the DGP sent a clear message to the separatists of the intent to restrict the disruption within acceptable limits. By calling for cooperation of the people he has, in a most astute manner, made them stakeholders in maintaining peace in the area.

These acts constitute an apt demonstration of the determination of the Mufti led government to draw a line so far as such disruptive activities are concerned.

The Congress party has already evolved a well-defined policy to corner the Mufti government on the issue of Armed Forces Special Powers Act (AFSPA). A senior Congress leader from the valley has recently stated that the UPA regime could not evolve a consensus to revocation of AFSPA which led to a status quo.

A discussion ion the status of AFSPA will top the Mufti agenda during his forthcoming meeting with Union Defense Minister, Manohar Parrikar, during the latter’s visit to the state. Mufti has already attempted to build a consensus among the senior officers of the army in Jammu and Kashmir for his position on partial revocation. The army has remained non-committal; it has said its point and thereafter left it to the political leadership to deal with the issue.

A wide ranging view on the subject, however, continues to advocate maintenance of the status quo since Pakistan is showing no signs of ceasing its interference in the state. Infiltration attempts are continuing and so are terrorist initiated incidents. The problem at the moment is not so much about containing this menace; it is directed towards maintaining the security threshold in a manner that obviates possibility of an escalation. Peace has been brought about at great cost, the security forces would not like to see anything happening that can cause a revisit of the days of violence.

The demonstrated capability of the neighbouring state indicates the need to maintain a high level of vigilance and preparedness. It is quite evident that the slightest window of opportunity provided by the Indian security apparatus will be exploited to the hilt by the terror mongers. The terror infrastructure is very much in place as is a large pool of terrorists waiting to b infiltrated.

CM Sayeed may not have set aside his agenda for revocation of AFSPA but he has certainly realised the need to evolve a larger consensus for the same. This is evident from the muted posture that he is presently adopting with regard to the sensitive subject.

He is now sensitive to the reality that he would be held responsible for the consequences of any hasty decision regarding this issue, especially so when there are many sane voices speaking against precipitate action. This is one decision that can attain historic dimensions and Mufti is too astute a politician to play is wrong. Mufti will ensure that nothing is allowed to weaken his agenda of reconciliation.

To summarise, the problem is not with good intentions on the part of Chief Minister Sayeed, it is with the response of the other parties especially those that wish to follow the path of division. Nevertheless, there is an idea of peace visiting the valley; what is now required is to bring about an awareness of its dividends to the people at large and create an environment where those opposing have no option but to relent to the stronger view point. Peace is round the corner, a few good steps will help cover the distance.