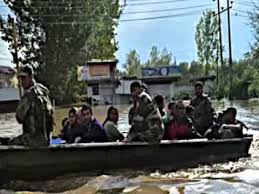 On 07 September 2014 the Indian Army in Jammu and Kashmir launched Operation Megh Rahat to meet the challenge posed by devastating floods in Srinagar city and some other parts of the state.

Many parts of the state, particularly Srinagar, witnessed unprecedented rain in August-September 2014. The long incessant rains led to a flood situation in the first week of September of a scale never seen earlier. Complete houses were inundated in a matter of hours and the people had to climb onto the roofs to save themselves. The state administration naturally became paralysed since its headquarters were in the area that was worst affected. Other places like Poonch were also affected by flash floods.

It was under such challenging circumstances that Operation Megh Rahat was launched by the Indian Army. Despite suffering tremendous losses and damage to its own camps, the Army placed the highest priority to rescue of stranded civilians. The soldiers and officers continued to function despite losing all that they possessed less the clothes they were wearing at the time of moving to dry land.  They worked day and night to meet the challenge.

The Army was called upon to take a leadership role in the rescue operations under the compelling situation of the state government being rendered helpless. The army took everyone along with it in managing the operation. All agencies and the people worked seamlessly, shoulder to shoulder with no thought of any personal gains. It is only the spirit of humanity that prevailed.

No rendition of the herculean effort would be complete without acknowledging the assistance provided by the civilians, the National Disaster Relief Force (NDRF) and all such constituents of the state administration who could be mustered for the task, The Chief Minister, Omar Abdullah, himself went on helicopter sorties to provide relief material.  All the civilians who had private boats in working condition joined hands with the army in the rescue operation.

As the operation progressed there were more than 30,000 troops involved on ground in a scale that was unimaginable under the challenging circumstances. Behind them was the complete might of the Indian Armed Forces.

Air Force and Army helicopters carried out relentless sorties to get e people out and also airdrop essential life saving supplies. About 500 Army and NDRF boats were pressed into service to rescue the stranded people whose numbers were in lakhs.

Those rescued were given shelters in more than 20 relief camps established by the army in places like at BB Cantonment, Avantipur, Old Airfield, Sumbal, Chattargam, and Zeishta Mata Mandir in Srinagar region that housed 20,000 flood affected people.

Free food, bottled water, essential supplies, medicines blankets etc were provided to lakhs of people all through the relief operation.  Medical camps were established across the flood devastated region to look after the sick whose numbers also crossed the 20,000 mark.

It was because of the awesome effort of the Indian army and all others involved that there was no loss of life reported after the initial stages when flash floods took a toll, especially in the Poonch region.

On January, 15, 2015, on the occasion of Army Day, the soldiers of the Indian Army, in a noble gesture, donated one day’s salary to the Prime Ministers Relief Fund for relief work in the flood devastated areas of Jammu and Kashmir. A cheque of Rs 100 Crore collected through this gracious initiative was presented to Prime Minister Narendra Modi by the Army Chief, General Dalbir Singh, during the traditional “At Home” function organised at his residence in New Delhi.

Army Rules empower the Army Chief to make contributions for disaster relief to funds that have been approved by the Prime Minister. The army has always remained conscious of its social responsibility; serving personnel have made such contributions on several occurrences of national calamity. In an earlier instance, one day’s salary of all serving soldiers was donated to the Prime Ministers Relief Fund in aid of Tsunami victims in 2004.

Nobody can understand better than the army as to what the people of Kashmir and also other areas like Poonch went through due to the flood calamity. It is no wonder then that the Army felt it incumbent to reach out to the people of the state in their hour of great distress. The one day collection of pay was a spontaneous reaction of the soldiers to assist their friends when the need was the most.

This was definitely not the first time that the army had come forward to render such assistance. The region is routinely afflicted with landslides, avalanches, cloud bursts, earthquakes etc and the Army is invariably in the forefront with all possible assistance.

Over the years the Indian army has established a special bond with the people of Jammu and Kashmir. There would hardly be a soldier who has not served in the state at some point in time during his career span. The people and the soldiers have jointly met the challenge of foreign sponsored terrorism and brought the region back to normality from the brink of disaster. During this journey there have been many instances of calamity towards which the army has exhibited great sensitivity and has come to the aid of the people spontaneously as a friend and a well wisher.