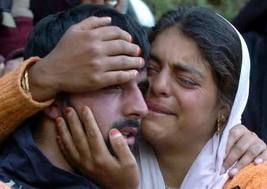 There is a very potent word in the in English dictionary – Drifters. This denotes a human species which is always following an illusion. This personality trait propels people into becoming nomadic gypsies, going from one place to another with no coherent aim in mind. Drifters do not exhibit any loyalty to their community, nation or homeland, they simply move on when a place or a society does not hold their interest any longer. The so-called misled youth of Kashmir also comes in the category of Drifters.

Two decades ago they allowed themselves to be indoctrinated into following a path of violence that went against their well embedded Sufi culture and answered a call for terror through an ill conceived jihad. They floated across to Pakistan Occupied Kashmir (POK) and by so doing played into the hands of their exploiters. They were given training and sent back into their homeland as criminal terrorists under the leadership of foreign commanders. They committed atrocities against their own people and in the process earned the ire of their own community. Those who were not killed and managed to get back to POK on completion of their tenure and those who were not inducted at all because they were found unfit during training, were reduced to bonded labour of the Jihad Mullahs. They became a people without an identity or a status in society and went on to lead a life of deprivation and penury. Even marriage and begetting of children from a local woman did not ameliorate their lot and their status and financial position continued to keep them in the fringes of society as virtual outcasts.

Now, after two decades they have expressed a wish to take advantage of the rehabilitation policy (recently put in place by the state government after due approval of the centre) and get back to their homeland – Kashmir. They are willing to forsake the family and the life that they have carved out for themselves over two decades in POK. These unfortunate souls have not achieved anything from those who promised to them heaven on earth and beyond. This is a classic example of the Drifter variety.

A rehabilitation policy was put in place by the Mufti government also. The end result did not accrue a credible social or political impact. Those who came back turned out to be misfits in their families, wrought with a guilty conscience for having left a family across. The people in Kashmir were also not ready to take them back because the wounds caused by them had not healed. The general public was not willing to forget the hardship that it had borne due to the terrorist movement of which these persons were an integral part. They people did not wish to forgive the poralisation of their secular and enlightened society by a foreign sponsored movement, due to which the much vaunted minority community of Kashmir was brutally driven out. Most importantly, the people were not willing to absolve those who spilled the blood of their own brethren with impunity and were party to perpetration of inhuman crimes against their women and children.

The Pakistani government is aware of the embarrassment in international circles that this reverse exodus is likely to cause to their fragile Nation and it has gone into overdrive to improve the lot of this dislocated segment. It is being reported that after ignoring these so called Mujahideen for three decades the government is now planning to give to them the status of refugees and is also planning to build a colony for them in Musaffarabad.

The yearning of these wannabe militants and drifters to shed the path of violence and return to the mainstream highlights the fallacies of the ongoing separatist movement in Kashmir. The change in heart of the core group of indoctrinated youth is a clear indicator that the politics of division being followed by a selective few have not yielded positive results and now a reverse movement is on the cards. This change of heart was inevitable because the ideological platform on which the movement has been based is, by itself, weak and self effacing. Kashmir never had and never will have a stable future with Pakistan as was indoctrinated into the unfortunate youth who gave up everything for a lost cause.

The drifters are now in a Catch-22 situation. If they come back they lose, if they do not, they lose. There is not much that they can do since it is a problem of their own creation. They supported a wrong cause and indulged in criminal activity, now, they have to pay for their sins and in the process their families on both sides of the line of control will be the worse sufferers.

It would be expedient for the government to fully understand and comprehend this complex situation. Rushing headlong into a policy of rehabilitation without taking all aspects into consideration will lead to chaos. The matter requires a deeper thought and understanding. The unfortunate part is that the process of indoctrination is unabated. Foreign powers are pressing their cadre in the Valley to wean maximum possible youth in the fold of terrorism and send them across the line of control for training. Further ammunition is provided by the propagandist utterances of the separatist group. The plight of the Drifters and the emaciated Mujahideen of the Valley should serve as a lesson for future generations to be vigilant against vested interests which blatantly use propaganda and evil indoctrination to mislead gullible youth into destroying their future.