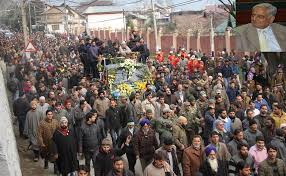 The Chief Minister of Jammu and Kashmir, Mufti Mohammad Sayeed, is no more. This columnist has never met him but has been writing about his policies and politics for quite some time. May he rest in peace and the almighty bestow upon his family the strength to bear this irreparable loss.

Mufti had, to his credit, a long and chequered career in politics. He had seen many avatars from the Democratic National Congress, to the Indian National Congress, to VP Singh’s Jan Morcha and then back to the Congress before founding his own party, the People’s Democratic party (PDP) in 1999. He was a Union Minister with governments of two different parties as also the Chief Minister of Jammu and Kashmir twice.

It goes without saying that Mufti was a politician first and foremost, a very experienced and adept one at that. He never put all his eggs in one basket and also maintained ambivalent, multi-lateral postures on contentious issues – he rooted for enhanced security to curb terrorism but also extended an olive branch to local youth in the fold of terrorism; he considered Jammu and Kashmir to be an unalienable a part of India but also insisted on separatist being engaged in talks. There were many such contradictions in the politics practiced by Mufti.

The “running with the hares and hunting with the hounds” policy followed by Mufti did not allow tangible results to accrue even when the opportunities presented themselves. As a Muslim Home Minister in the National Front government and despite being from Jammu and Kashmir, he could not stem the tide of terrorism in the state. His stint as a part of the coalition government in Jammu and Kashmir witnessed the politically debilitating Shri Amarnathji agitation which literally tore the state apart.

Mehbooba Mufti, the daughter of Mufti Mohammad Sayeed has been his soul mate in politics for almost two decades now. All this while she has preferred to stay in the background, it is however well known that she is the force behind the build up of the PDP.

Now, with the sad demise of Mufti, the mantle of governing the most sensitive state of the Indian Union has fallen on Mehbooba Mufti. Differences in the political approach of the father-daughter duo will now come in the forefront as Mehbooba moves from being an ideological anchor of the party to its executive head.

Mufti relied on his formidable political goodwill across party lines to get things done. Unlike her father, Mehbooba is media savvy and often engages in debates and discussions. This presents the possibility of a more open approach, unless of course, Mehbooba clamps down on becoming chief minister and leaves the rather inept media set up of her party and government to deal with information spectrum.

Revocation of the Armed Forces Special Powers Act (AFSPA) from the state has been a special issue with Mehbooba since long. When the PDP came into power in coalition with the BJP, she camped in Delhi to engage the media and build a consensus for, at least, partial revocation of AFSPA.

The result was not positive since the nation does not look at the prospect of lowering the security threshold in Jammu and Kashmir as a viable option at a time when Pakistan is refusing to relent from its policy of exporting terrorism to India despite herculean efforts to break the impasse by none other than Prime Minister Narendra Modi.

As Chief Minister, Mehbooba will have to look at security practically rather than ideologically. The Pathankot terrorist attack and security related incidents in Jammu and Kashmir, like cease fire violations, infiltration bids and acts of terrorism in the hinterland in Kashmir are severely challenging the security threshold of the nation. The immediate requirement is to beef up security to challenge the violent, inimical and evil designs of a very determined enemy.

In this context, Mehbooba will have to set aside her personal convictions and ensure that security in the state is neither compromised not jeopardised. The infrequency of meetings of the Unified Command which functions under the chairmanship of the Chief Minister will need to be set aside in favour of more meetings and better co-ordination, motivation and direction. To ensure this, the chief minister will have to take the lead. There is, of course, no question of reducing the security threshold anytime now or in the near future.

The PDP-BJP coalition will also have to get its act together before it is too late. As things stand, the coalition is dividing rather than integrating the state with each party concentrating on to its own constituency – the BJP has eyes only for the Jammu region and PDP looks only at Kashmir. If things continue in this manner the possibility of yet another Shri Amarnathji type of agitation in the near future cannot be precluded.

When the two parties, accepted to be poles apart, have decided to come together for the common good they should put their heart and soul into the decision. The direction has to be provided by the Chief Minister. PDP may not have won a seat in the Jammu region but it did earn a lot of goodwill. It is sad to note that instead of building on the goodwill it is s isolating itself from the people due to its visible bias towards the Kashmir valley, such acts do not behove well for the state..

There are a lot to good things to remember Mufti Mohammad Sayeed for, most of all his inherent humanity. There were also certain weaknesses in his approach that need to be set aside now that a younger chief minister is in place. There is a need to build on all the good that came from the persona of Mufti Mohammad Sayeed so that his dream of a peaceful, developed Jammu and Kashmir is realised.

(Dr, Simrit Kahlon is an academician and a columnist)