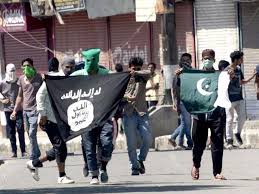 Ever since it has come into existence, Pakistan has played out a diabolic and concerted plan to radicalise the Kashmiri society. A society that has existed for many millenniums as a secular entity based on an enlightened Sufi couture.

The state of Jammu and Kashmir has been in the grip of a destructive and violent separatist movement sponsored by Pakistan for many decades now. This climate of perpetual disruption and destruction has taken its toll on the human psyche, especially that of the younger generation.

Ahle-e-Hadith has a Wahabi-Salafi Islam orientation that is followed extensively in Pakistan. The Wahabi-Salafi movement has been in the forefront of the Jihad in Kashmir. Pakistan-based groups fighting in Kashmir under the banner of the Salafi movement consider it a moral imperative and a religious obligation to conduct Jihad in the region; for them any misrepresentation of this doctrine amounts to apostasy.

Three decades have passed since this psychological war started in the valley. The youth of the valley, who have lived in the shadow of the gun and an uncertain atmosphere, are constantly fed with a huge dose of the Jihadi language and culture.

No dialogue, no thought process, no appeasement seems to be having a positive effect on those who have been indoctrinated, so deeply ingrained is the Jihadi mindset in their system. This mentality compels even those who are not active to support the cause of Islam by shielding the terrorist from security forces whenever any encounter or search is going on.

In the wake of this upheaval, the culture and tradition of the Kashmir Valley has suffered a big blow. The younger generation is wearing ankle-length trousers, long beards and skull caps and women are donning Hijaab. All such changes in dress are not only against the climatic conditions but also pose a greater threat to the original Kashmiri culture and traditions, which is now at the verge of disappearance.

Violence on religious grounds is quite alien to the Sufi culture of Kashmir. It is a recent entry into the socio- political landscape introduced more by the same imported fundamentalist concepts of Islam.

For a long time now, political analysts, media experts, administration and even security agencies have been, ignorantly or deliberately, dealing with Kashmir as a political issue. What needs to be given unremitting attention is the social and religious dimension.

The abiding tragedy of the situation is that Pakistan itself is on the verge of extinction for having followed the path of radical Islam against the teachings and perceptions of the founder fathers of the nation state.

At the time of partition, the vision of the creator of Pakistan, Muhammad Ali Jinnah, was of a nation that would adopt secularism to accommodate its historically multi-religious and culturally diverse population. “You are free; you are free to go to your temples, you are free to go to your mosques or to any other place or worship in this State of Pakistan. You may belong to any religion or caste or creed — that has nothing to do with the business of the State,” said Jinnah in his first presidential address to the Constituent Assembly of Pakistan on August, 11, 1947.

The Hindu and Sikh families that chose to stay back were assured of security and basic rights. Sadly, what has happened is in total variance to the vision. Pakistan has, over the years, exhibited an eerie determination to exist as an Islamic State comprising only of Sunni Muslims.

At the time of partition, Pakistan had 11 to 12 percent Hindu/Sikh population. When considered in terms of the existing population levels of the country, the present strength of the Hindu/Sikh community should be around one crore fifty lakhs; on ground it is a miniscule thirty lakhs which is barely 1.5 percent of the population. One crore thirty lakh people have vanished in thin air.

Muslims of sects other than the predominant Sunnis are being blatantly persecuted. Sections 298-B and 298-C of the Pakistan Panel Code outlaws Ahmadis from calling their place of worship a Masjid, claiming to be Muslims or preaching their faith to others.

Pakistan is home to about six lakh Shiite Hazara Muslims mainly in Quetta, Balochistan. This hapless community is being specifically targeted by al Qaeda associated terrorist groups like Lashkar-e-Jhangvi and Sipah-e-Sabah, as a continuation to their persecution and ethnic cleansing in Afghanistan.

Nearly 17000 registered and countless unregistered Madrasa’s and seminaries are providing education to the masses. The curriculum has a bias towards religious fundamentalism.

Radical warlords like Hafiz Saeed and Maulana Masood Azhar hold immense power with full support of the Pakistan army, the most radicalised entity in Pakistan.  Hafiz Saeed and those of his ilk have gained the confidence to attempt seizing of political power through the electoral process. Intolerance, sectarianism and radicalisation in Pakistan is becoming dangerous not only for the region but for the world at large.

There is an urgent need to save Kashmir from following Pakistan into oblivion. The region has to be extracted from the certain destruction that the Pakistan sponsored narrative is leading it to.

It is here that the government has a big role to play. A massive campaign against such Madrasa’s that teach religious venom in the garb of education is the first step in the path of de-radicalisation. Civil society needs to be incorporated in the effort to isolate youth from subversive indoctrination. It should be emphasised that Pakistan is on the verge of extinction because of the radicalised politics that it has allowed to proliferate in its society. It is definitely not an example that an ancient and enlightened civilization like Kashmir needs to follow.

It is hoped that good sense and reason will prevail and Kashmir will once again revert to Kashmiriyat, the backbone of the philosophy of co-existence in the Valley and Sufism, the mainstay of Kashmiriyat.