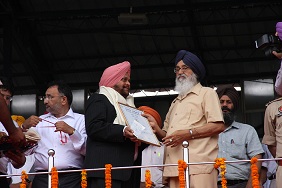 Brigadier (Retired) Manjit Singh, Director Defence Services Welfare, Punjab, was honoured with the award of’Punjab Parman Patra 2013’by Punjab Chief Minister Parkash Singh Badal at a State level function held on Independence Day, 2013. Punjab Parman Patra is a State award for professional excellence. Brigadier (Retired) Manjit Singh is the first Director Defence Services Welfare to be honoured with this award. He was appointed on this important post in December, 2011 and all the projects launched during his tenure were completed well in time.