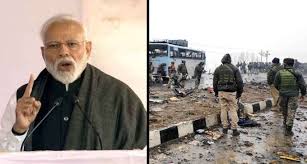 While coming to terms with the horrific terrorist attack on a CRPF convoy at Pulwama, Kashmir, it becomes important to see Pakistan’s reaction to the carnage that it has sponsored. Pakistan has taken military, political and diplomatic actions with such clinical precision that can only be the outcome of previous knowledge of an incident or good experience in dealing with such issues.

Within no time of the incident taking place, the Pakistan Army leaked out information of its troops on the Line of Control (LOC) and the “Working Boundary” (Pakistan’s terminology for the International Border) having been placed on “High Alert,” in view of India’s “war mongering” and calls for “revenge.”

Having sent out an indication of being prepared for a military strike by India, Pakistan went into overdrive to control the situation politically and diplomatically.  Most perfidiously, it rejected Indian “allegations” linking the attack to the country. “We strongly reject any insinuation by elements in the Indian media and government that seek to link the attack to Pakistan without investigations,” the Pakistani Foreign Office said in a statement.

The next step was initiation of a diplomatic blitzkrieg in which first to be invited for a briefing by Foreign Secretary Tehmina Janjua were the Ambassadors of the P-5 Nations  viz US, China, Russia, Britain and France.  Janjua, once again and most perfidiously, rejected Indian allegations against Pakistan and noted, “A familiar Indian pattern of immediate and reflexive assignment of blame on Pakistan without investigations.”

Pakistan’s sophisticated propaganda machinery was then put into overdrive! In all languages and all channels of the country, India was portrayed as an “Occupation Force” against whom the Kashmiri’s are revolting. Other propaganda themes including terming the attack as “a conspiracy to help Indian Prime Minister Narendra Modi win the general elections” and “deflect attention from the trial of Kulbhushan Jadhav by whipping up anti-Pakistan frenzy.” Prime Minister Modi was also called, “the face of an internationally notorious terrorist organisation (RSS).”

Pakistan’s Foreign Minister Shah Mehmood Qureshi has been at great pains to emphasise that “the Indian dream of diplomatically isolating Pakistan would never come true.” “Meetings with German, Canadian, Uzbek foreign ministers and Afghan president have shown that India’s claim of diplomatically isolating Pakistan has failed,” he told the media in Germany.

Having taken all initial steps Pakistan, on the second day and beyond, is building up a propaganda narrative that highlights India as an aggressor in Kashmir. Its media has spoken extensively about withdrawal of security of Kashmiri leaders and the targeting of Kashmiris’ by “angry mobs” across India. It has specifically mentioned imposition of curfew in Jammu due to mob violence.  “Hindu fanatics affiliated with ruling Bharatiya Janata Party (BJP), Rashtriya Swayamsevak Sangh, Bajrang Dal, Shiv Sena, Vishwa Hindu Parishad and other extremist organisations raised anti-Kashmir, anti-Pakistan and other provocative slogans,” says the Express Tribune, a well known English daily newspaper of Pakistan. The narrative of Kashmiris being targeted across India has been played out by giving names and places including statements by the so-called victims. From where Pakistan gathered this information is anybody’s guess.

India is being referred to as the “Republic of Delusion” and it is being insinuated that the country has, “blinded itself to the reality that its problem is not Pakistan but its own savage treatment of the people of Occupied Kashmir.”

The aforementioned makes it quite obvious that Pakistan is not going to take the pressure being built by India lying down! It is, in fact, ready to fight back every inch of the way on all fronts including the economic, diplomatic and military options that India would be considering. India, therefore, needs to be ready for a long haul for which patience and confidence in her abilities need to remain intact.

The emotions enveloping the people of India in the wake of the dastardly terrorist attack are understandable. The situation, however, demands a fair degree of thought being give to the options of retribution available. The foremost requirement is strengthening of the internal security mechanism since an enemy should always be tackled from a position of strength. The voice of Kashmir should resonate for India even as the agents of Pakistan in Kashmir are neutralised in totality; the separatists and divisive elements should be subjected to the harshest treatment under law to set an example for those inclined towards pursuing anti-national activities at the behest of the enemy. The sources of radicalisation of the youth need to be nipped in the bud regardless of the political feathers and religious sentiments ruffled.  Counter-terrorist operations need to gain momentum to finish off the remnants of terrorism. At the same time, security procedures need to be strengthened to ensure that own forces are not subjected to a terrorist attack or related mishaps.

It is important to hit hard at Pakistan’s weak points! The weakest at the moment are its precarious financial condition, the huge wave of unrest palpable in all provinces other than Punjab and the virtual takeover of the country by fundamentalist forces.

India needs to impress upon the international community the need to ensure that the financial bailout for Pakistan comes only with the caveat of visible action against the terrorist and fundamentalist infrastructure being nurtured on its soil. The fact that Chinese assistance is coming with the intention of converting Pakistan into a virtual colony needs to be impressed upon the common people of the country who will be the worst sufferers. The genuine problems being faced by the people, especially the disputed status of Balochistan and Pakistan Occupied Jammu and Kashmir (POJK), need to be highlighted as an issue of global concern.

Seeking retribution with a limited military strike may offer a morale boost for the country but it will not have any far reaching impact. An all out war will also remain inconclusive in the long run even if India emerges with a resounding victory. What would pay long term dividends is an all compassing strategy which builds gradual but sustained pressure till the end point is not achieved.

(Dr. Simrit Kahlon is an academician and Geo-political analyst)