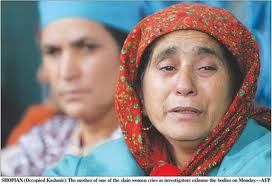 United Nations Secretary-General, Ban Ki-moon, appointed Margot Wallström of Sweden as his Special Representative on Sexual Violence in Conflict in February 2010. Ms. Wallström has been a long-time advocate of the rights and needs of women and she has a long history in defending women’s rights. Immediately after assuming the appointment she promised a more coherent and effective battle against the scourge. “Sexual violence against women is not cultural, it’s criminal”, she said.

Ms. Wallström was in New Delhi recently to participate in a Peacekeeping Vision 2015 Seminar hosted by the United Services Institution of India, UNIC, New Delhi. During her visit, a press conference was organised where India was recognised as one of the strong pillars of the international community committed to UN peace keeping. Ms. Wallström also stated that the United Nations has no reports of alleged sexual violence by Indian troops In Kashmir, “So far, we do not have proper reports about this… so far, we have not received any reporting on such cases…. I can’t say that there was anything in particular (about Kashmir),” she is said to have stated.

It is notable that praise for the Indian efforts in international peacekeeping is attributable to the impeccable behavior of the Indian troops who are detailed for these duties. Such statements by senior UN officials further reflect the high degree of discipline and traditional respect for women that is ingrained in the troops of the Indian Army.

In the case of Kashmir, cases of crimes against women by troops of the Army are few and far between, whenever some stray incident has come to light it has been dealt with expeditiously and exemplary punishment has been meted out to defaulters. This is the reason behind the confidence that the UN has placed upon the behavior of Indian troops in Kashmir. This is also the reason behind the feeling of security that the women of Kashmir feel due to the presence of troops in the vicinity of their abodes. They participate vigorously in all development initiatives initiated by the Army and have also taken training in the use of arms to assist the security forces in fighting terrorists. The concept of all women Village Defence Committees is a perfect example of the manner in which women perceive terrorists on the one hand and security forces on the other.

Unfortunately, a similar level of confidence cannot be placed upon those who profess to fight a holy war for the liberation of the people of Kashmir. Terrorists have a dubious record with respect to sexual violence. Those who came with a so-called holy mission did not waste much time before succumbing to the pursuit of a good life that, in their limited sphere, translates into good food, good wine and satiation of their carnal desires. Exploitation of ethnic Muslims women attained unprecedented proportions. Women both married and unmarried were used with impunity. Families were also used by terrorists to subjugate their local cadre, as a form of reprisal family members, especially women, were regularly kidnapped and subjected to unspeakable torture and humiliation. There have been many instances where local’s terrorists have revolted against such humiliating practices by the foreign cadre and have been mercilessly killed for doing so. In fact, the list is so long that it would require a voluminous narration much beyond the scope of this piece.

Even now when their wings have been clipped considerably, atrocity against women is one criminality that terrorists are not ready to give up in a hurry. The latest case of a blatant day light murder of two sisters Akhtera and Arifa in Sopore on January, 31 by one Waseem Ahmad Ganai alias Sheruni, self-styled district commander of Lashkar-e-Taiba continues to send a shiver down the spine of every Indian citizen. Justice prevailed when this criminal was shot down by the security forces on March, 13. It is not incidental that the sex ratio in Kashmir, that stood at a healthy even keel in the last census, has seen a perceptible dip in the female population during the recent count. The reason is unmitigated exploitation over a sustained period of time.

Now that Kashmir is moving towards normalcy there is an urgent need to ameliorate the suffering of all women who have been subjected to sexual violence during the period of intensive conflict. Their emotional, psychological, social and financial rehabilitation has to be the responsibility of the State. It also has to be ensured that such incidents do not occur in the future. The elimination of Waseem Ahmad Ganai is a step in the right direction since it has sent a clear a clear message to the terrorists that the security forces will seek them out and eliminate them in case they do not relent from targeting innocent women.

Sexual violence under the shadow of conflict is the basest form of criminality and it has to be dealt with a degree of seriousness and commitment similar to other aspects of law and order/internal security. Wallström is outspoken about her belief that sexual violence is a criminal act – often a war crime – and that perpetrators should not be allowed to walk free. There is a growing realisation globally that women’s security is important for international security. The US Secretary of State Hillary Clinton has called upon the international community to recognize that “women’s rights are human rights”.

This is the spirit with which crimes against women should be dealt with in Jammu and Kashmir regardless of the environment of terrorism that plagues the State. Whatever wrongs have happened have to be put right while ensuring that none else suffers humiliation and trauma of this nature. All segments of society have to jointly launch a sustainable movement for the protection and dignity of women.