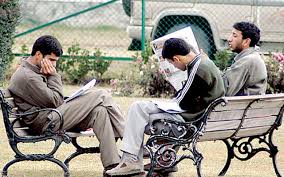 Post the very sad cycle of violence that has enveloped the Kashmir Valley for the last three months, the good news coming out now is that people have started defying strike calls by separatists and are insisting upon getting back to their normal routine.

A significant thrust in this direction has been witnessed in the school attendance of students which has crossed the 50 percent threshold in recent days despite calls for Bandhs (lock outs). This situation has much to do with the young students insisting to attend school, resume their education and prepare for their examinations. They simply do not wish to lose out a year due to the follies of their parents and elders.

Awareness for the cause of education percolated from the social media. A #SchoolChalo campaign recently became viral on Twitter.

The initiative took momentum with the support of the British journalist and commentator, Tufail Ahmed.  “In Kashmir, Hurriyat is giving so many “Chalo” calls. I wish now they give #SchoolChalo call for the sake of our children. @sageelani,” he wrote on his twitter handle @tufailelif on September, 27.

Many more #SchoolChalo tweets castigated the separatists, especially Syed Ali Shah Geelani, for having stalled the education process in Kashmir. Separatists were strongly impressed upon to think about the future of Kashmiri children. They were told unequivocally that they had no right to destroy the careers of the children of Kashmir and called upon to stop politicising education.

A positive engagement came up in the form of a tweet from the Udhampur based Northern Command of the Indian Army that confirmed functioning of a majority of Army Goodwill Schools in the Kashmir Valley and sent out an open request to all stakeholders to facilitate opening of all schools.

There are enough indicators of a conscious effort being made by separatist and divisive forces to break the education pattern of the region. During the ongoing protests, as in the case of the previous ones, schools have been specifically targeted. In the past three months, six schools have been gutted; one each in Ganderbal, Shupian and Bandipora and as many as three in Anantnag, which is the constituency of Chief Minister Mehbooba Mufti.

Most distressing is the gutting of the oldest educational institute in South Kashmir, Hanifa School. It is fervently hoped that the chief minister will restore this iconic institution to its historic glory in the shortest possible time.

A close look at the manner in which events have unfolded is a pointer to the eternal dichotomy that marks life in Kashmir. On the one hand there are a large majority of school going children who are insisting on resumption of their studies in order to save a precious year of their lives and, on the other hand, it is school going boys who are the spearheading to the unrest ostensibly because of a so-called sense of “anger.”

It is evident that a large majority of the school going children in Kashmir is frustrated by the long shut down and a small minority is indulging in arsonist activities.

The small minority, however, works out be a few thousand, a number sufficient to create mayhem of a degree which can hold the silent majority to ransom and can stall normal life in the region. It works at the behest of the separatist and divisive elements that operate within the state and from foreign shores and is, as such, privy to financial and political support.

The feeling of sullen persecution that the people p of Kashmir nurture and the illogical grouse that they have against any and every form of government gets rubbed into the impressionable psyche of the young minds.

A fair degree of this familial indoctrination also has its roots in cadres of the Jamaat-e-Islami (Jamaat), a religious-political organsation that has been providing ideological support to the separatist movement in Kashmir for many decades now. Burhan Wani, the terrorist whose killing by the security forces led to the present turmoil, belonged to a family that has allegiance with the Jamaat.

Since Jamaat has a larger presence in South Kashmir, the local recruitment into terrorist cadres as also the focal point of the ongoing unrest has its roots in the area. The so-called “commanders” of the protesting gangs of young boys are, by and large, from families that have roots in Jamaat.

The adage, “An empty mind is a devils workshop” rings true for the children of Kashmir who are following the path of self destruction out of ignorance and frustration.

Indian Army which understands the need to protect of the young minds. Almost two decades back, under its welfare initiative named Operation Sadbhavna it launched many Goodwill schools and also gave a big boost to sports. The army regularly organises sports competitions in various disciplines especially cricket and football which witness overwhelming participation.

By standing up for their education the children of Kashmir have sent a clear message to their parents and elders. It is now up to the latter to resist the well organised plan of certain inimical forces to keep their children deprived of education. They have to devise ways and means to protect their future generations.

The best method is to keep them isolated from negative influences and also take a firm stand against attempts to disrupt their routine. The government also needs to create facilities of sports, entertainment and development of young minds to ensure that their energy is diverted towards gainful pursuits.

(Dr. Simrit Kahlon is an educationist and columnist)