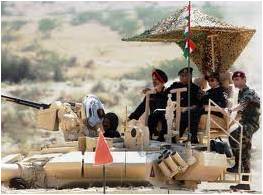 In what is said to be the first precedent of this nature, President Pratibha Patil donned black fatigues of the Indian Armoured Corps and rode the T-90 Main Battle Tank, while visiting the field formations conducting “Exercise Sudershan Shakti” in Barmer. The President also addressed the troops participating in the Exercise. “The country is faced with multi-dimensional challenges and the Army has to measure up to these threats,” she said.

Exercise Sudershan Shakti, a massive training event involving more than 50,000 troops and 300 tanks with support of Artillery Guns, Attack Helicopters, Air Force sorties and other military detachments is aimed at honing the skills of the Army in future generational warfare which will be integrated and net work centric. The thrust of the exercise is on the use of over-flying UAVs, geo-stationary satellites, ground-based sensors, radars and fighter aircraft to provide information to troops on ground. The overall effect will witness the Indian troops going in for deep, sharp thrusts.